You are at:Home»Current in Carmel»Carmel Community»Spring Mill Road upgrades near completion after 18 months of work

Construction crews are nearing the end of 18 months of major infrastructure upgrades along Spring Mill Road, but when the road completely reopens – which is expected in mid-December – drivers might not notice many changes. 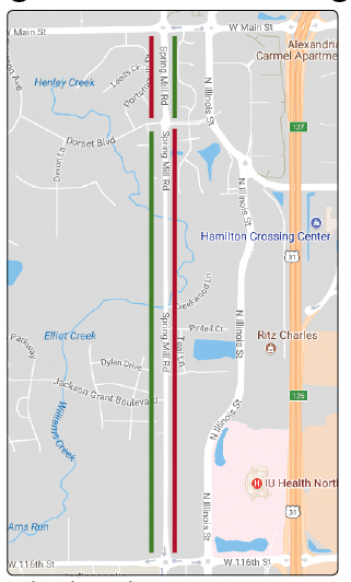 City of Carmel Engineering Administrator Josh Kirsch said he expects the lack of visible updates to cause people to question why the project took so long. Most of the work was done underground, he said, and won’t be evident to drivers.

“There were big storm pipes put in the ground, roads were rebuilt, utilities were moved and relocated,” Kirsh said. “There was a lot of stuff that happened below grade that’s not that impressive when you get on the road for the first time.”

The project is taking place in seven phases between Main Street to south of 106th Street. Some phases along the 2.5-mile stretch are complete, while others are still causing closures and restrictions. Spring Mill Road is closed southbound between Main Street and Dorset Boulevard, northbound between Mallard Court and Dorset Boulevard and in both directions between 116th and 106th streets for construction of a roundabout at 111th street.

The project also includes the rebuilding of two bridges and replacing traditional culverts south of 106th Street to a three-sided box culvert, a “massive” undertaking, according to Kirsh.

“They had to move the stream to align it with the structure,” he said.

Kirsh expects many of the closures to end in the next week or two with the entire project being complete by mid-December, right on schedule.

“They have had major delays, but those crews out there have made it up,” Kirsh said. “They’re attacking it like a swarm of army ants. They’ve got an army of people out there working.”

Much of the project was done in anticipation of future growth on the west side of Carmel.