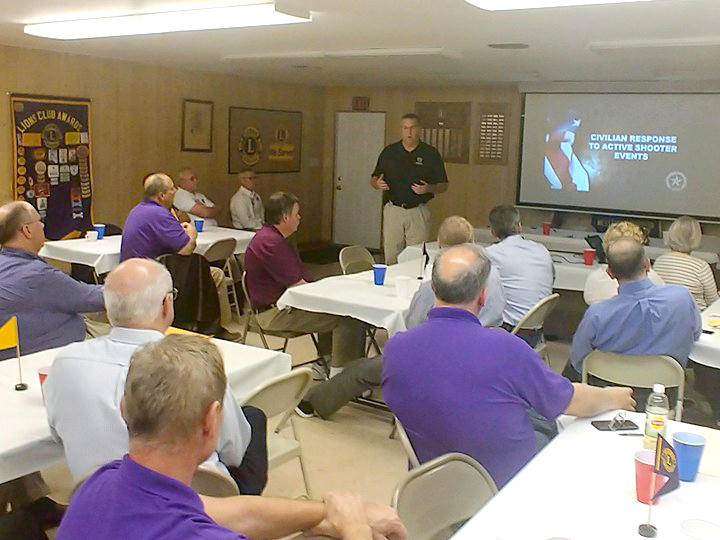 Sgt. Bill Clifford presents a program on how to survive an active shooting to the Westfield Lions Club Nov. 2. (Submitted photo)

Westfield Lions Club members learned how to stay calm and react safely during an active shooting.  Sgt. Bill Clifford of the Hamilton County Sheriff’s Office presented the Civilian Response to Active Shooter Events program to the club at its Nov. 2 meeting.

Club members  listened to a 911 call from a Columbine High School teacher, saw a video from a nightclub fire where 31 people died and more. Clifford used the examples to demonstrate the Avoid Deny Defend tactic.

The tactic instructs citizens to avoid  or leave the disastrous situation, if possible; deny, or hide, if there is no exit available; and to defend themselves with available items. He gave four ways to execute the tactic: Staying calm, initiating combat breathing, shifting emotion from fear and staying fit.

“When it’s time to act, so act,” he said. “Do it with purpose and act with everything you have because it may be your last act.”

Clifford said citizens’ disaster responses begin with denial. People tend to go into denial of the event such as brushing off gunshots as fireworks. He said it’s important to skip the denial step and go straight into deciding what actions to take.

Clifford stressed knowing where the closest exit is, and that in crowded areas such as department stores, there is usually a service exit in the rear of the store. He also encouraged acting as a group if civilians are required to defend themselves.

“If you all react together, (the shooter) can’t engage everyone at once,” he said. “You have to be committed.”

Members watched videos from survivors of the Virginia Tech shooting and learned other statistics about active shooting events.

Clifford is running for sheriff in 2018.