The Indiana Historical Society has chosen historical interpreter Eddie Grogan as one of only two recipients of the 2017 Dorothy Riker Hoosier Historian Award. Grogan has spent most of his adult life working to educate the thousands of visitors that come to Conner Prairie about his passion: 19th century history. 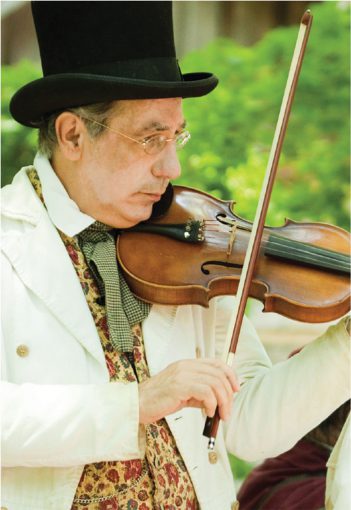 Through the years, Grogan has brought to life many characters, such as Dr. Campbell and Ezra Higbee, through first-person interpretation. When he plays a character, he dresses and talks like he lives in the era he is depicting, giving visitors insight into an entirely different time.

The award is given to someone who has made distinguished contributions to the field of historical scholarship by the use of presentation and preservation.

But Grogan’s unique way of presenting historical information is not the only thing he is known for. He also mentors and trains coworkers, writes and revises scripts, does historical research, creates works of art and delves into the world of music.

“I play fiddle and I play guitar,” Grogan said. “I sing and I make dances, square dances, community dances. Outside of Conner Prairie, I’ve done musical gigs in various places where I’ve gone and played music or led dancing.”

In every aspect of his work, Grogan tries to be as accurate as possible for visitors. The tunes he plays on the fiddle, the songs and the dances are all accurate to the time period.

“I really think it is very important for us to be accurate,” Grogan said. “They (Conner Prairie visitors) have come to trust us to have accurate information. I think that’s a real important trust on our part and it really moves us to be as historically accurate as we can be.”

When Grogan found out he won the award, he said he was “flabbergasted.”

“I am someone who has never really sought out accolades and prizes and things like that,” Grogan said. “But, boy, to have been nominated for this and to have had over a dozen letters of support written by various people—it makes me feel like I’ve made a mark and that people have had their lives positively impacted by what I have done. That’s something that I find pretty gratifying.”