You are at:Home»Night & Day»‘Broadway and Beyond’ set for CAT Theatre

Ashton Wolf is ready to share some of his other talents with area audiences.

Wolf, who co-founded the theater company Nickel Plate Players with his wife Sandy Thorne in 2014, is presenting “Broadway and Beyond” at The Cat Theatre in Carmel, at 7:30 p.m. Nov. 17 and 18. The performances feature Wolf and Jessica Hawkins, both Fishers residents. Wolf said he agreed to partner with Will Wood of The Cat Theatre for certain productions. 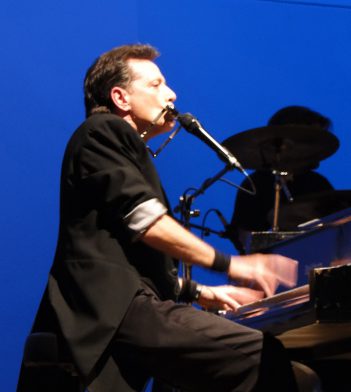 Ashton Wolf will present “Broadway and Beyond” at the Cat Theatre.
(Submitted photo)

“There are several productions that have large casts of performers, which is too big for that space,” Wolf said. “So, we started with “Dueling Pianos,” and then I decided I wanted to create a smaller cabaret-type show and one in which I could come out from behind my piano. The (Indianapolis-area) theater community sees me in one light. They don’t know I performed on stage as an actor. I do a little dancing, so I thought it would be a good time to show the community what I do.”

Wolf then thought who would be the best person to share the stage with for this show. Hawkins was in one of Nickel Plate’s original productions, “Beehive,” in 2014.

“I immediately noticed not only her ability and talent, but her professionalism,” Wolf said.

In addition, Wolf was a fan of Hawkins’ appearance as Mexican painter Frida Kahlo in Gregory Hancock Dance Theatre’s “La Casa Azul” in 2015. Wolf received permission from Hancock for Hawkins to perform some songs for this show.

“He even offered up some of the tracks for us to use,” said Wolf, adding the tracks feature a full orchestra. “He’s been so supportive and so gracious.”

In addition, Wolf said there will be classics, duets and solos from Broadway and classics from famous Piano Men.

Hawkins is excited about the variety of the performances.

“This is really fun because I get to sing songs that are not part of a specific character,” Hawkins said. “There are a lot of songs I’ll never get to sing in a show. Some are more romantic. Some are ridiculous and funny. Gregory’s songs are a little more dramatic, definitely deeper.”

Wolf will perform songs from his play, “Ten Pin Alli,” which he co-wrote and directed.

“It’s really nice to be able to do songs from different shows,” Wolf said. “You can’t pop into Sondheim (music) in the middle of a Rodgers and Hammerstein show. We get to mix it up and present a lot of different writers and materials.”

Wolf serves as artistic director of Nickel Plate Players, which operates under the parent company of The Indiana Theatre Company. Among the shows he created was “Indiana The Musical” as part of the bicentennial celebration in 2016.

“I’m going to have three pianos on stage in various positions,” Wolf said.

Wolf had been an actor much of his career, with a few favorite roles being Rooster Hannigan in “Annie” and Captain Von Trapp in “The Sound of Music.”

Hawkins began performing in community theater approximately six years ago after not having performed since high school.

“My mom (JoAnn Crum) did a show and I thought that looks like fun,” she said.

She had performed with Footlite Musicals, Civic Theatre and Theatre on the Square.

Thorne and Aaron Henze are co-producers of the show. Adam Allen is the associate producer and Anne Chesser Martin is the choreographer.

What: “Broadway and Beyond”