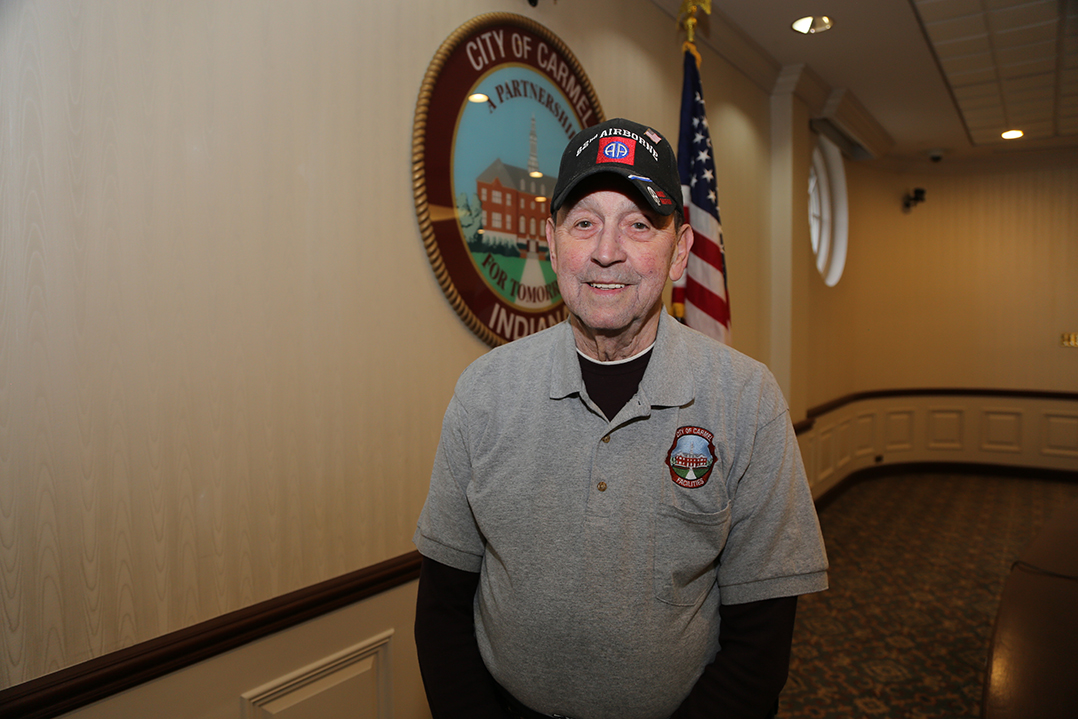 Eighty-two-year-old Hughie Cooper is a man of routine.

Every day when he comes to work at Carmel City Hall, he likes to wear his 82nd Airborne Division cap with American flag pins attached.

Every day, he stops by the American Legion Post 155 in Carmel. He has  a cup of coffee and puts a quarter in the drawing.

Every day, he inspects all of the flags at the Carmel Clay Veterans Memorial. He always looks down to see the brick with his name on it just outside of the reflecting pool.

“I come by there every day,” he said. “I maintain the flags and make sure they aren’t frayed. People complain if you see a fray. That flag means everything to me. It means we live in the greatest country in the world.”

Cooper tried retiring at age 66 after more than two decades as a tool and die maker in Carmel, but he got bored. He couldn’t sit at home so he went back to work. He worked as a gas station attendant first, but then joined Carmel City Hall, where he’s worked for 13 years.

Cooper likes to chat with city employees as he empties the trash, but he never talks about his military background. Many don’t realize he was a paratrooper. He jumped out of an airplane more than 101 times.

“I have a certain respect for him because he’s a veteran and my father was a veteran,” said Kelli Prader, a community relations specialist for the city. “Just having him in the building and the history that comes with that makes you want to know him. He’s a hard worker and he’s always nice to talk to and he’s just a pleasure to be around.” 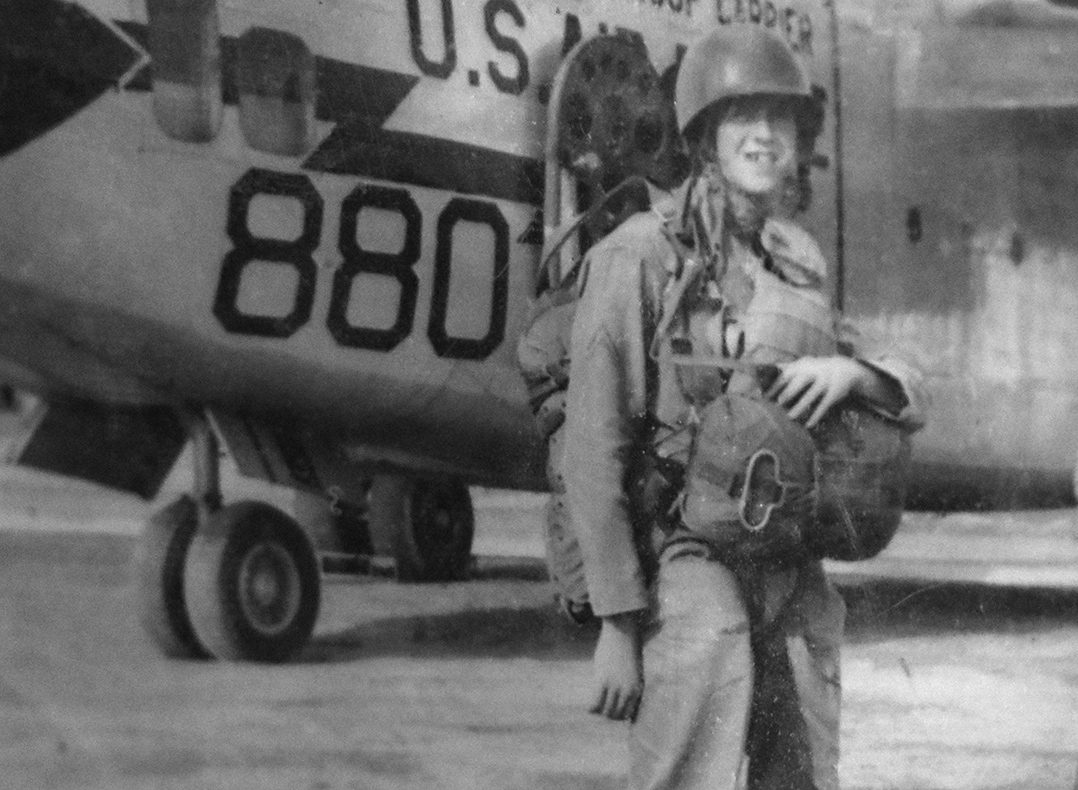 Hughie Cooper was a paratrooper in the U.S. Army and jumped out of an airplane more than 100 times. (Submitted photo)

Cooper was born and raised in Virginia. His father worked in a coal mine and moved to Noblesville when Firestone began recruiting employees following the Korean War. Cooper, the oldest of six children, graduated from Sheridan High School in 1953 and enlisted shortly after. He went to jump school in North Carolina and then went to Germany. He worked in operations and intelligence and made his last jump in Beirut, Lebanon, in 1959. He said they didn’t know why they were sent to Beirut but found out later it was because of a religious conflict.

“We never fired one bullet, but we heard some,” he said.

Cooper was in charge of scheduling the jumps and keeping records. Back then, paratroopers were paid $55 per jump but had to jump at least every three months to get the money.

“I put myself on every manifest every time,” he said. “I loved it.”

Cooper’s four younger brothers all entered the military as well. One of his  brothers served in the Vietnam War, and because of exposure to Agent Orange, family members believe, he developed ALS, also known as Lou Gehrig’s Disease. 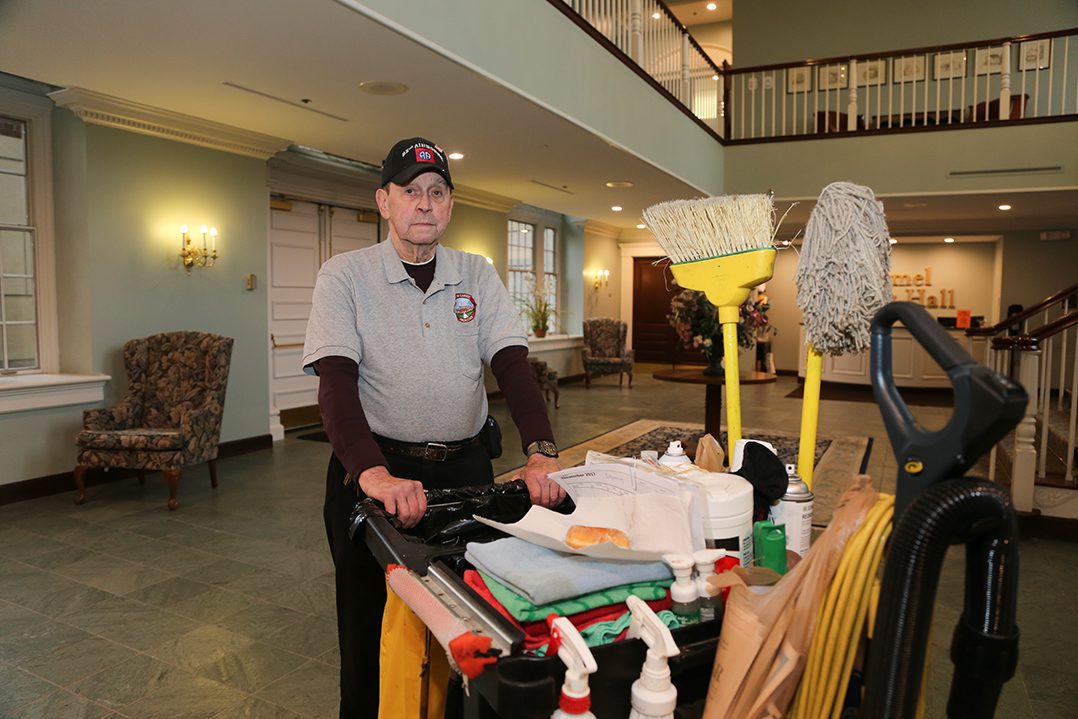 Cooper’s wife Joann, 77, is retired. She ran her own day care business and also helped raise their four adult children. Cooper, on the other hand, said he plans to work until he no longer can.

Cooper’s job can be physical. He’s always moving  and cleaning, although daytime crews often make his job easier. Either way, he has no problem keeping up.

Cooper has lived in Carmel since 1968, and he’s seen a lot of changes during that time. He said he’s happy to call Carmel home.

“Oh mercy, yes, I love what they’ve done,” he said. “I love it here in Carmel. We have the best water and utilities. Our fire department and police department are without a doubt the best. They respect their veterans here. It’s a great place to live.”