You are at:Home»Current in Zionsville»Zionsville Community»Zionsville man honored with Crime Stoppers USA Coordinator of the Year Award

Sgt. Steve DuBois received a warning seven years ago when he applied for a new assignment within the Indianapolis Metropolitan Police Dept. 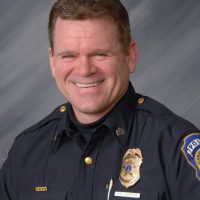 “When I interviewed for Crime Stoppers, the man that would become my boss, Lt. Thomas Kern, told me to get ready, the job would get into my blood and take over my life,” DuBois said. “Pretty accurate.”

But the Zionsville resident is not complaining. A 31-year veteran of IMPD, DuBois has been with Crime Stoppers of Central Indiana since 2010 and regards the assignment a highlight of his career.

But of greater note, Crime Stoppers has especially high regard for DuBois, who recently received one of the program’s most prestigous national honors.

In September, DuBouis received the Crime Stoppers USA Coordinator of the Year Service Award, presented, according to the organization, in recognition of his “outstanding performance and commitment, personifying a spirit of community cooperation and demonstrating qualities of leadership.”

For DuBois, it’s all in a day’s police work.

As coordinator of Crime Stoppers of Central Indiana, which serves 17 counties, DuBois oversees a community-driven program that in 2016 alone received a record 7,000 tips that resulted in nearly 300 felony arrests, including seven homicide arrests, 131 illicit drug arrests and 15 sex offender arrests.

A self-described “jack-of-all-trades,” DuBois is equal parts community organizer, law enforcement liason, fundraiser, media liaison and creative project manager, among other responsibilities, in a program that relies heavily on public support and input.

“The public is the key,” DuBois said. “They have the knowledge needed to solve cases and capture felony fugitives. Keeping the tipsters anonymous is also a huge part of what makes Crime Stoppers work.”

A married father of five adult children, DuBois’ crime stopping network is, in many ways, his second family.

“Like my old boss said, it will take over your life,” DuBois said. “It is the thrill of the hunt and the ability to give families and victims some closure and justice while at the same time creating safer communities.”