Bill Shaffer has appointed himself the unofficial non-mayor of Carmel, a title he often invokes when writing letters to the editor that appear in Current in Carmel and its website. 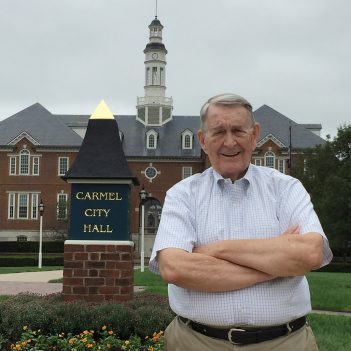 Bill Shaffer appointed himself the unofficial non-mayor of Carmel and has penned several letters to the editor under the authority of that title. (Submitted photo)

The youthful 82-year-old man (who jokes he recently had his résumé returned by Chippendale’s “unopened”) is a retired writer who has a passion for using humor to comment on important issues in his new home town.

“When I have written, it was because the folks I listen to in Carmel really care about various issues, whether it’s a mayor-go-round, the Guinness Book of Records number of roundabouts or the ways in which government confiscates the money of people to spend on non-governmental functions and activities,” Shaffer said.

Shaffer and his wife, Judy, moved to Carmel six years ago from Illinois. His background is in writing. His first paying job was as the editor for his college weekly publication, and he hasn’t stopped since. He’s been reporter in Wisconsin, an editor for the Associated Press in Chicago, communications manager for IBM, public relations director for General Mills and a consultant in PR, crisis communications and speechwriting. He retired at 65 but went back to work to head up speechwriting activities for the American Medical Association until 2010.

His prime motive in penning letters to the editor is to “provide an antidote to the usual fist-in-the-air, angry letters some feel compelled to write.”

“Most were ill-written. Few showed much thought,” Shaffer said. “All lacked the light touch.”

Ask Shaffer which is his favorite letter, and he’s quick to point out it’s a “bad question.”

In the end, he hopes his letters will stir a little patriotism in others.

“The country, to me, is too valuable to give up on. Here folks care, participate, argue, cuss and discuss. I love it,” Shaffer said. “If I can scribble a line or two to remind folks of their duty, responsibility, honorable calling as American citizens – hooray!”