You are at:Home»Current in Zionsville»Zionsville Community»Zion Nature Center naturalist surprised by award for work

Zion Nature Center naturalist Mindy Murdock had no advance clue she was even nominated for a yearly award. So winning was a real shock. 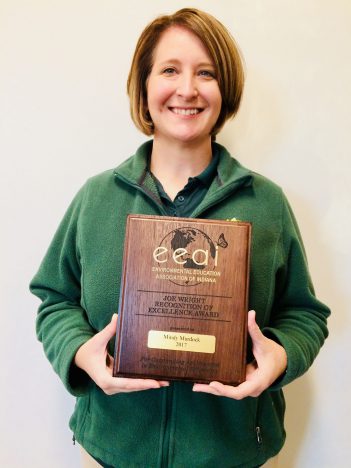 Murdock captured the Environment Education Association of Indiana’s Joe Wright Recognition of Excellence Award at the conference Oct. 14 in Morgantown.

Murdock, who has been with the Nature Center for three years, had gone to the Environmental Education Association of Indiana to make a presentation.

“They posted the nominees before the awards dinner and I saw that is me on the board,” Murdock said. “I had no clue, so it was a big surprise.”

“It’s telling us what we already knew here what a valuable asset Mindy is to our Zionsville Parks and Recreation and our community,” Dickey said.

Dickey said she excels in her regular duties along with other projects.

Murdock, who has been at the Nature Center since May 2014, was honored for her work with the Indiana Children and Nature Network, a project of EEAI. ICAN started doing nature play days, encouraging children to get outside.

“We wanted to make it more community wide versus just the Nature Center doing a play day,” she said.

Murdock helped set up 10 Nature Play Days, hosting some at the Nature Center. The 2018 dates are June 9 to 17.

“I hope to continue to grow it and get some more organizations interested,” Murdock said.

Murdock also was recognized for her work with the Children of Indiana Nature Park. The park, which is part of the Cope Environmental Center in Centerville, started issuing ceremonial deeds during the Indiana bicentennial year in 2016. Murdock contacted Zionsville Community Schools elementary schools and worked on getting a deed for every student going to school in 2016-17.

“We did a deed day in each of the schools, and I would meet with each of the grades one at a time,” Murdock said.