Music has been a big part of Ginger Thimlar’s life ever since she can remember.

She especially enjoyed listening to Christmas songs on the radio as a child. 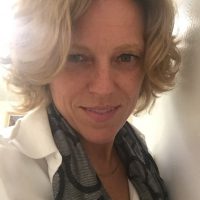 So naturally the Lawrence resident’s debut album is filled with those songs and titled “A Merry Little Christmas.” Thimlar’s album release party is set from 2 to 5 p.m. Nov. 4 at the Antelope Club, 615 N. Delaware St., Indianapolis. There will be a cash bar at the event.

“They are songs I’ve loved ever since I can remember,” Thimlar said. “I finally recorded them and it’s a special album because of that. It was fun putting this all together. My piano player on the album suggested that title and it all came together. There quite a lot of different feelings on each of the songs. None of them are the same.”

One of her favorites is “The Man with the Bag.”

Thimlar, who has a degree in message therapy, works as a Myoskeletal therapist at Apex Therapy Clinic in Fishers as well as a couple of other spots.

Thimlar spent several years in San Francisco and collaborated with a band called Chemystry Set for four years before returning to the Indianapolis area in 2011. Her father, Andy Thimlar, lives in Zionsville.

“I haven’t done music as intensely as I have doing this album,” Thimlar said. “I’m working on being a professional vocalist right now.”

Thimlar, a Mooresville High School graduate, was a member of the Singing Hoosiers as a freshman in 1989-90 before transferring to Taylor University and earning a degree in music education.

To RSVP or for more information, email releaseparty@gingerthimlar.com or call 317-946-8263.