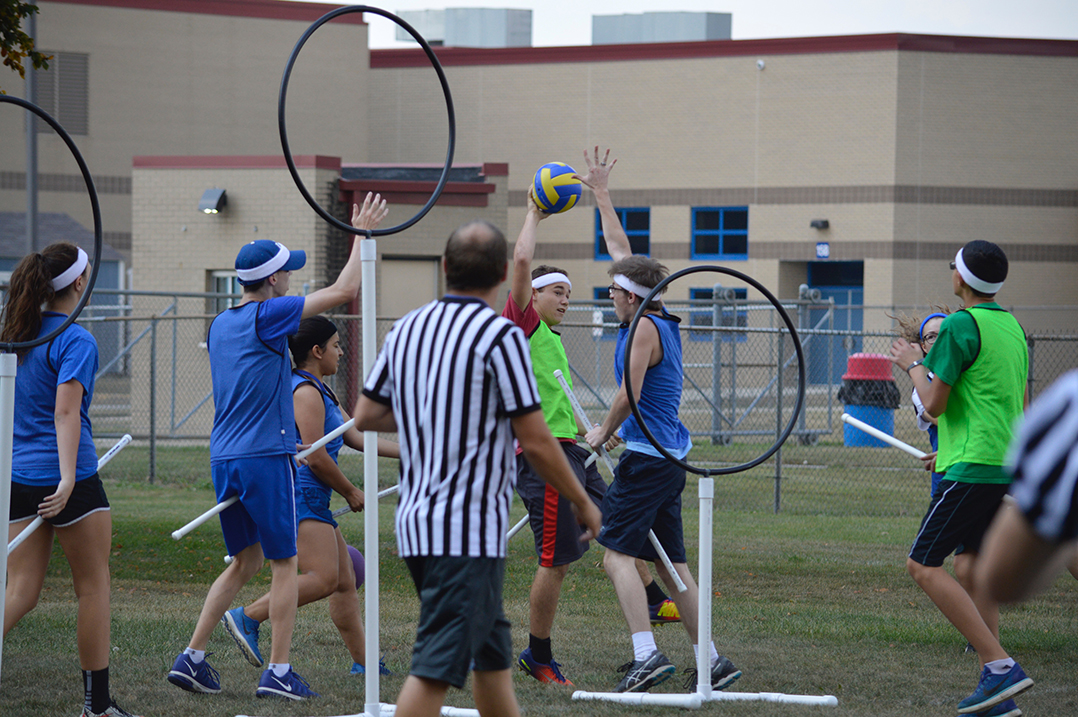 Ben Rump tries to throw a quaffle through the hoop as C.J. Everrett attempts to block the shot. (Submitted photos)

The Harry Potter Club of Hamilton Southeastern High School wants to bring a new magical sport to the high schools of central Indiana. Quidditch, a fictional sport invented by J.K. Rowling in the “Harry Potter” book series, has been a craze in the college and professional levels but has yet to become a popular high school sport. Keaton Squires, math teacher at HSE, wants to change that.

Squires is a teacher sponsor of the Quidditch Club, and Peter Salvadori is the teacher sponsor of the Harry Potter Club, which has played a significant role in the creation of multiple quidditch teams at HSE. There are approximately 200 members in the club, and 60 or more of those students have played quidditch each semester since its creation last year. Teams are sorted into the four houses in Harry Potter: Gryffindor, Hufflepuff, Ravenclaw and Slytherin. The four teams compete with each other to go to the championships each semester and to the Quidditch Cup at the end of the year. 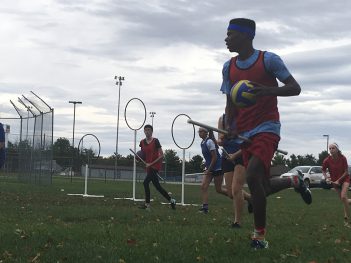 Nick Epperson runs with the quaffle.

Quidditch is very similar to the fictional version, with slight accommodations for the lack of flight. Each team is co-ed and has seven players: one seeker, one keeper, two beaters and three chasers. Instead of flying on broomsticks, players straddle PVC pipes. The goal is to score more points than the opposing team by throwing the quaffle (a volleyball) through one of three hoops or by the seeker catching the snitch. To symbolize the flying snitch in the book, there is a person acting as a snitch, with a ball attached to the back of their shorts.

“This is what makes the game really fun to watch,” Squires said. “When the snitch comes out, they can wrestle people, they throw people around, they grapple. The snitch doesn’t have to run with a broom between their legs, so they can use both hands to throw people and push people. The official rule of the books per J.K. Rowling is, ‘The game is not over until the snitch is caught.’ The game could go on for two days, or the game could go on for two minutes.”

The main duty of the chaser is to throw the quaffle into the opposing team’s hoops, guarded by the keeper, while the beaters use their bludgers (dodgeballs) to try to take them out. If a chaser is hit by a bludger, he or she must return to and touch their hoops before going back in the game.

The idea of playing quidditch has caught the eye of students from another local school, Fishers High School. Students from Fishers have been joining teams at HSE, but they would like to create a team of their own next year.

“The goal next year is that they actually have a Fishers team and an HSE team that compete with each other through a series of tournaments,” Squires said. “Our five-year goal is to get teams in Carmel, Westfield, Noblesville, Zionsville and all over the Indy area.”

Quidditch teams at HSE have even gotten the attention of college teams and a major league team.

“HSE has turned into kind of a feeder system for Ball State (University), IU (Indiana University) and Purdue (University),” Squires said. “All of those college teams have come out to our school to recruit and talk to the players to join their quidditch teams. A couple of them have even made the Indianapolis major league team, the Indianapolis Intensity.”

Jannah Hassan, a junior at HSE and captain of the Slytherin team, said playing quidditch has given her the opportunity to experience a team dynamic like no other.

“Quidditch is such a unique sport because every game is different and no matter what, there is always an element of surprise,” Hassan said. “It’s also unique because of our ability to have friendly competition. We all want to win but always help each other out in the end.”

The HSE teams play every Sunday at 2 and 2:30 p.m. just south of HSE’s football field. High school students interested in joining or creating a team at their own school can contact Keaton Squires at ksquires@hse.k12.in.us. 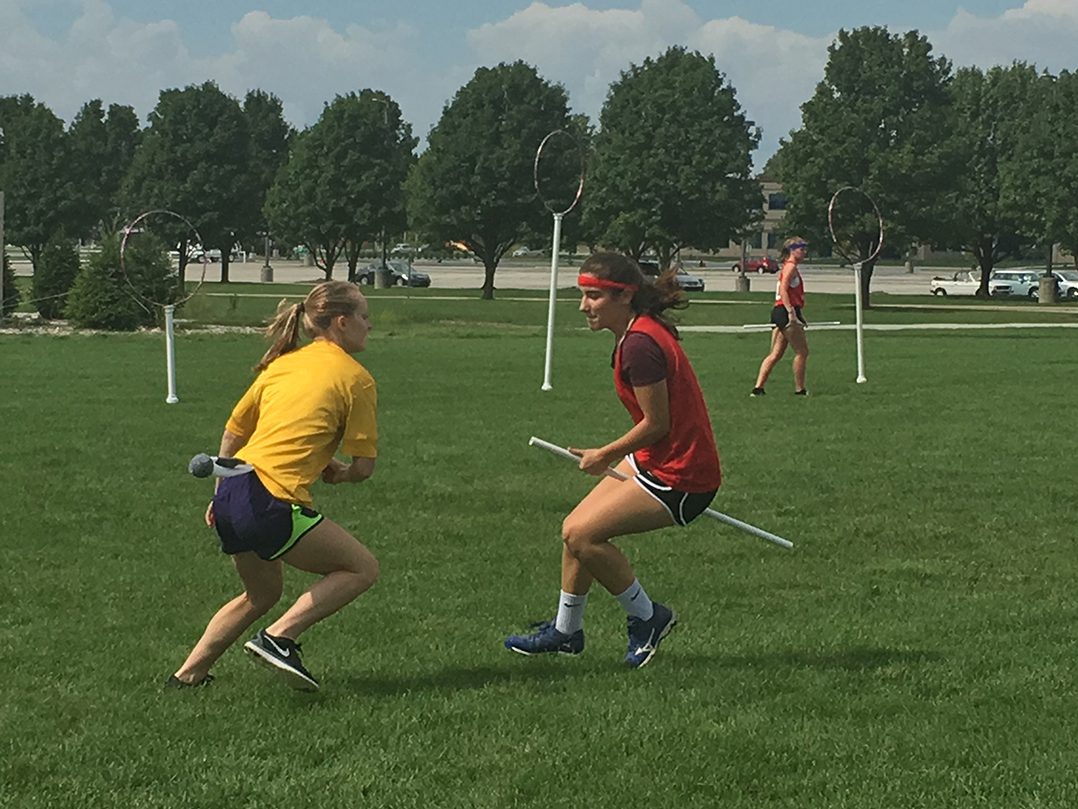 Hannah Van Tassel, left, portrays the snitch and tries to keep away from Jenny Turock.

Quidditch: One of the few sports to offer a co-ed environment

The sport of quidditch is not only unique for its origins in a fictional book, but it also is one of the few sports to have a gender rule. Out of the seven players on a team, there cannot be more than four players of the same gender. This means that for HSE students, quidditch is the only sport where it is standard for males and females to play on the same team.

“That’s why we’ve been able to connect with students so much,” coach Keaton Squires said. “The game is a mandatory co-ed sport, meaning you can never have any less than three girls on the team at a time. The girls at our school are really getting recognized for their athletic ability.”