You are at:Home»Lifestyle»Travel»Column: The Arch of Constantine 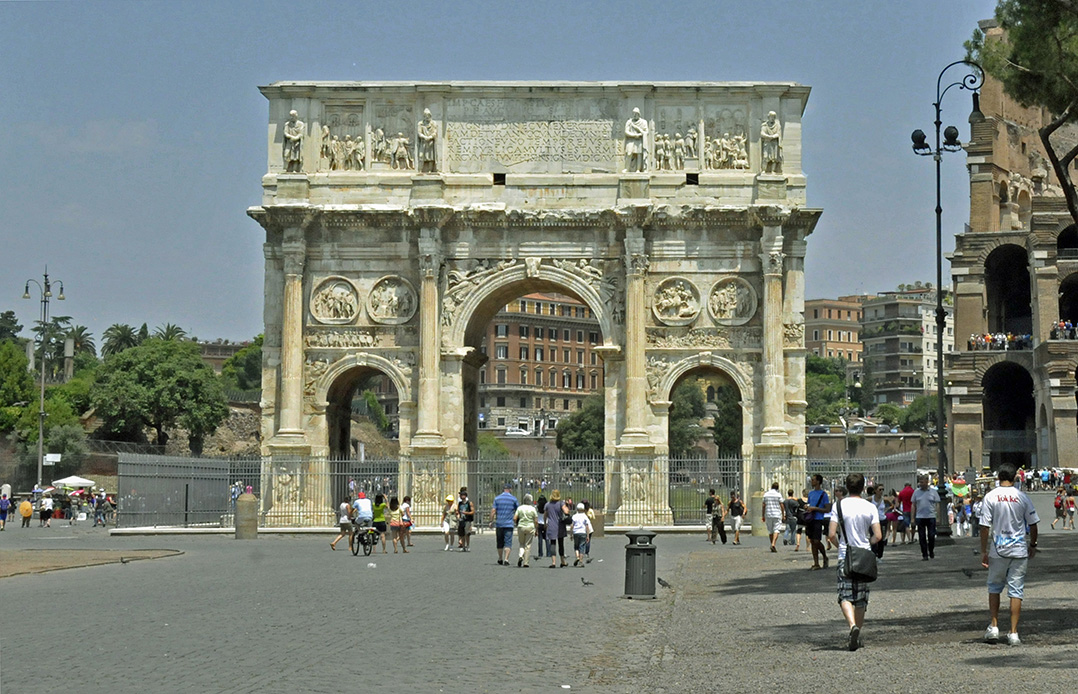 Arch of Constantine in Rome (Photo by Don Knebel)

The Arch of Constantine, near the Coliseum in Rome, memorializes an event that changed the direction of Western history.

On October 28, 312 A.D., Roman Emperor Constantine I defeated rival Emperor Maxentius in the Battle of the Milvian Bridge, thereby gaining unquestioned control of the Western Roman Empire. Constantine credited his victory to a vision in which the Christian God told him to put the superimposed Greek letters Chi and Rho, symbolizing the Christ, on his soldiers’ shields. In 313 A.D., Constantine, joined by the Eastern Emperor, issued the Edict of Milan, ending the persecution of Christians and making Christianity legal throughout the Roman Empire.

In 315 A.D., the 10th year of Constantine’s reign, the Roman Senate erected a massive arch honoring his victory at the Milvian Bridge. The three-portal arch, more than 82 feet wide and 65 feet high, straddled the Triumphal Way, the route by which the victorious Constantine had entered Rome, displaying the head of Maxentius. Identical inscriptions on either side near the top of the arch attributed Constantine’s victory to the inspiration of a singular “divine,” suggesting that Constantine wanted to affirm his belief in one God while not offending Romans still believing in mulitple gods. Curiously, the arch uses statues and reliefs from monuments honoring earlier rulers. Even the carvings depicting Constantine, some showing a halo around his head, were re-worked from earlier carvings. Some speculate this reclamation was necessary because fourth century Romans had lost the skill to create great works of art. Others believe the re-use communicated the idea that Constantine was the epitome of earlier leaders.

The Arch of Constantine is the last and largest Roman arch, inspiring, among others, the Arc d ’Triumph in Paris and the Brandenburg Gate in Berlin.The halo around the head of Constantine inspired later depictions of Jesus.