You are at:Home»Night & Day»Audience wins in IRT’s ‘The Originalist’ sparring match 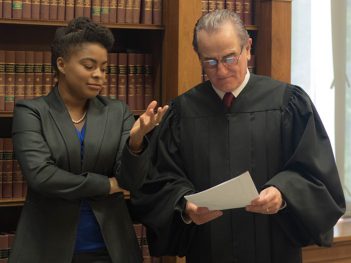 Ayanna Bria Bakari (left) and Henry Woronicz in “The Originalist.”

In this corner of the chambers, wearing a long, black robe and weighing in on everything from the Second Amendment to affirmative action to the Defense of Marriage Act is one of the most polarizing figures in American political life, the honorable Supreme Court Justice Antonio Scalia.

His opponent, wear a fashionable Afro-style hairstyle and also weighing in on just the opposite of all of Scalia’s issues is the upstart and self-described “flaming” liberal clerk by the name of Cat.

Let the sparring begin with opinions flying from the right and left.

And so it did for most of the non-stop, fast-moving minutes of John Strand’s “The Originalist,” playing on the Indiana Repertory Theatre’s Upperstage through Nov. 19.

In a series of scenes and debates set in the justice’s chambers, with a field trip to a rifle range and another more somber trip to a hospital room, Strand’s piece is not a biography of Scalia, played with extreme vitality and quick-witted humor by Henry Woronicz, but a fictionalized account, centering on the judge’s contentious if spirited relationship with the African-American clerk, played superbly by IRT newcomer Ayanna Bria Bakari. In real practice, the late Scalia, who died in 2016, occasionally hired a clerk that opposed his position to get a clearer view of the other side of the issue and to sharpen his own arguments. Or as he says to Cat, “I like to have a liberal around; it reminds me of how right I am.”

Rigid in his views, Scalia was known for being the most combative justice on the court, a champion of conservative values who interpreted the Constitution as a fixed document and not a fluid one. He compared the laws of the Constitution to musical notes, “that are now and forever.” Hence, the term “originalist.”

Cat, on the other hand, acts as Scalia’s sparring partner, doing her best to get Scalia to see the other point of view or, at least, meet somewhere in the middle.  It’s her sense of humor and her willingness to scuffle with him that Scalia begrudgingly likes.

In a late scene, the justice reveals he has a heart, after all, when Cat faces a family tragedy; he shows to have a willingness to meet her in the middle, not on matters of the law, but of the soul.

The sometimes testy, sometimes genial give-and-take between Scalia and Cat provide observers with an abridged version of his life story and the most controversial cases during his tenure, which began in 1986 when he was appointed by Ronald Reagan. The proceedings are seasoned with selections from Verdi, Mozart and Donizetti and Verdi works, a gesture to the justice’s well-known love of opera.

Woronicz and Bakari move the lively dialogue along at a TV sitcom-pace (think “Will and Grace”) with Scalia getting the best jokes and jabs, much to the audience’s delight.

As Strand explains, “I wanted to use this combative, almost operatic figure to explore how two people on opposite sides of a political, social and even legal spectrum can take a step toward one another, begin to listen, learn to hear and respect each other’s argument.

Strand never takes sides and neither “fighter” wins in the end. The real winner is the audience, who witness two masterful performances with superior direction by playwright in residence, James Still.