Pres Maxson is only 37. But he is already a prolific author. 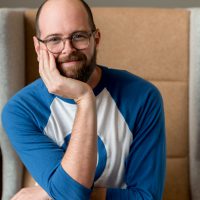 A copywriter by profession, Maxson also is a fledgling author who last month self-published his second novel, “Pigeon,” a humorous story about a busboy mistakenly hired as a private detective at an elite social club. His mission? Track down a trophy, stolen decades earlier, for a sport no one outside the club has ever heard of.

Oh, and the faux sleuth tries to impress a girl along the way.

“He plays along and bumbles his way through the investigation,” Maxson said. “The busboy navigates the world of the uber-elite, encountering exotic pets, gargantuan egos and enough plot twists to keep him guessing.”

A Carmel resident, Maxson self-published his first novel, “Bender at the Bon Parisien,” in 2015. It, too, is a humorous mystery tale, albeit inspired by an actual trip he and his wife took to Paris.

As a more experienced storyteller, Maxson is particularly pleased with his second book,  which, like his first, is self-published through Amazon.

“With ‘Bender,’ I really was just learning how to write a novel,” Maxson said. “I was inspired by an actual event and I had a vision for creating a fictitious world around that event, but I definitely had to find my way through the woods on it. It took twice as long to write. I’m proud of it, but I really believe ‘Pigeon’ is better. I think it’s a tighter story, and hopefully funnier.”

A Butler University graduate, Maxson is a full-time copywriter for Salesforce in Indianapolis. He writes ad copy and content for the company’s website, among other tasks. But nothing stokes his creative passion quite like fiction writing.

“At its base, I like that it’s a medium for sharing ideas. Plus, I like the process,” Maxson said. “It’s hard work expressing your idea with just the right tone to a specific audience, but it’s gratifying when I come up with something that feels right. I like that writing is quiet, therefore easy to do at any hour without waking the neighbors. And part of the fun of creative writing is sharing when the idea is complete.”

Maxson’s novels can be purchased at amazon.com/dp/B07572GTJ8. He and his wife, Mollie, have three children, Cece, Josie and George.