You are at:Home»Night & Day»Hymes ready to launch new era for CSO as first female conductor

When Janna Hymes first started interviewing to become a music director of symphony orchestras, it was rare. 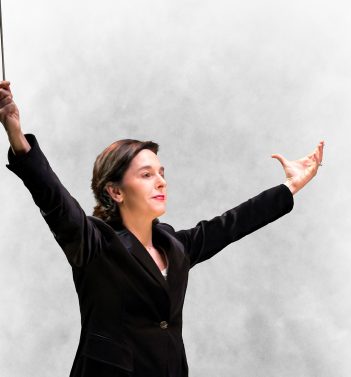 Janna Hymes is the first female conductor in the 42-year history of CSO. (Submitted photo)

“There just weren’t a lot of women doing it, and it was always a novelty,” Hymes said. “Every time I interviewed it would come up and it was the focus. Now, there are so many young conductors coming out of schools. There are workshops for female conductors, and I’m teaching one in New York. It’s really amazing that a lot of women now are making this their career and are very successful. It’s still a very, very small amount of women compared to the guys. There is still a glass ceiling there.”

Hymes was named the Carmel Symphony Orchestra’s first female music director and seventh overall in its 42-year history in May following a national search. She was one of three who served as guest conductors during the selection process. She will make her debut with CSO when it presents the Clay Township Orchestral Showcase at 7:30 p.m. Oct. 14 at The Palladium in Carmel.

The New York City native, who lives in Maine, conducts the Williamsburg (Va.) Symphony and the Maine Pro Musica Orchestra, which she founded in 2008. But CSO is her priority.

“This is a very exciting time for me, personally,” Hymes said. “I can’t wait to work with the orchestra again. What we did over the summer is really putting some finishing touches on some programming.”

Hymes, who concluded a three-year stint as the Indianapolis Symphony Orchestra associate conductor in 2000, said she has been working on fundraising events and looking at CSO’s future.

“I’ve been listening to board members talk about the history and talking about where we might go in the future,” Hymes said. “A lot of it is a learning curve for me.”

One change Hymes made after taking over is adjusting the February 2018 program.

“I wasn’t sure the pieces really meshed well together,” Hymes said. “The music of (Aaron) Copland’s ‘Billy the Kid’ was on it, and I felt that’s a very visual piece. It’s a ballet. When I was studying the music this summer to perform it, I felt it was hard to stand alone without the visual in your head. So we changed the program around to play Howard Hanson’s Symphony No. 2, the ‘Romantic,’ which is perfect because it’s four days before Valentine’s Day.”

Another change is that Hymes will conduct the Holiday concert Dec. 9, which wasn’t originally the plan.

“I’m really excited because we have two of the singers who took part in and won the Songbook Academy Youth Ambassador competition, Julia Bonnet and Lucas DeBard,” she said. “I’m really excited to collaborate with them and more be related to the Great American Songbook.”

The only CSO concert Hymes will not conduct is April 14, 2018, because of a prior commitment. Charles Prince will serve as guest conductor.

Hymes, who has two grown sons, said she will have complete involvement in the 2018-19 schedule.

“I have the dates already because The Palladium is so fantastic,” Hymes said. “I’m starting to work on programming already, even though we haven’t started this season yet.”

(All shows at the Palladium in Carmel)