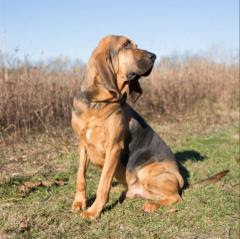 On Sept. 26, the Hamilton County Sheriff’s Office announced the death of former K9 Deputy Waldo, who died the same day. In recent weeks, Waldo’s health declined.  Waldo joined the Sheriff’s Office as a puppy in 2009 and served residents of Hamilton County until his retirement earlier this year. Along with his partner, Deputy Nate Biddle, Waldo handled many calls for service and was responsible for numerous finds around the area. (Submitted photo)