You are at:Home»Night & Day»Nickel Plate Arts host Comic Book in a Day

Years ago, it was not uncommon for much of the general public to dismiss superheroes and the comic books as entertainment created exclusively for children and nerds, a disposal art form not to be taken seriously.

Now, in 2017, as the Marvel Cinematic Universe has become the most successful film franchise in history, and comic book-inspired movies such as “Wonder Woman” and “Suicide Squad” post huge box office numbers, mainstream audiences have come to recognize what millions of comic book fans have known for decades: Comic books are a fascinating and riveting combination of literature and art, a unique and innovative medium of storytelling and ideas.

Those elements will be on full display Oct. 7 when Noblesville’s Nickel Plate Arts, 107 S. 8th St., presents its fourth annual Comic Book in a Day event from 9 a.m. to 9:30 pm. The event will feature activities, artwork, workshops and conversations with local comic book artists.

How did the idea for Comic Book in a Day originate? 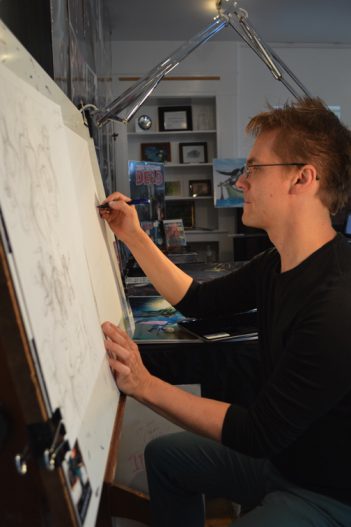 “It was a combination of things,” said Ailithir McGill, Nickel Plate Arts director. “It really began with Free Comic Book Day. We wanted to do something that involved a day-long event, but we would cut it to 12 hours instead of 24. Then, Stuart Sayger told me about how he and his friends have comic book night where they get together and create comics.”

Sayger is a comic book creator and professional illustrator who will be on hand to conduct a workshop on collecting comic book  art.

“I really like watching that inspiration unfold,”McGill said. “It’s like they say, ‘I’m watching you create this, and I can talk to you about it.’ It’s also really fun to see families come in, and the children are answering questions about the superheroes for their parents. It’s great to watch the children lead in that experience.”

For more information on Comic Book in a Day, visit nickelplatearts.org.