You are at:Home»Current in Zionsville»Zionsville Community»Lyft driver accused of raping Zionsville woman during ride home

A man who was working as a Lyft driver is in the Boone County Jail after allegedly raping a woman in a car on the way to her Zionsville home. 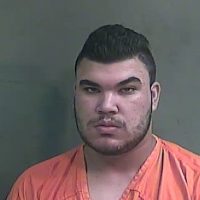 According to a probable cause affidavit, Nour Baber Mahmoud Albadri, 22, Indianapolis, picked up the woman in a silver Hyundai Sonata after she called for a Lyft from a friend’s home early in the morning of Sept. 16. She had had spent a night out with friends at Brother’s Bar in Broad Ripple, it states.

The affidavit states that during the ride the victim used her cell phone to record Albadri after he began talking about sex, making her uncomfortable. It states she told Albadri multiple times that she didn’t want to have sex but that he grabbed her breasts as he drove. He then stopped the car and forced himself on top of her, placing his hand into her underwear, it states, before eventually driving her home, where she ran inside and called police.

Police located Albadri Sept. 18 at the Phillips 66 gas station in the 2500 block of N. College Ave. in Indianapolis, where he was at work. He was arrested Sept. 22 by the Zionsville Police Dept. and charged with rape, criminal confinement and two counts of sexual battery. Bond is set at $250,000.

Lyft released a statement in response to the incident.

“These allegations are horrific and very upsetting. There is no tolerance for behavior like this in the Lyft community, and we take these claims very seriously,” it states. “As soon as we were made aware of his incident, we immediately deactivated the driver’s account. We have reached out to the passenger to offer our support and assistance, and have been in communication with authorities.”