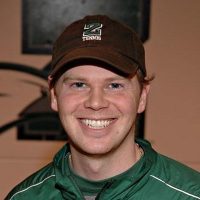 “Over the past year, I started to contemplate advancing my coaching career to the collegiate level,” said Moore, who coached Zionsville’s boys and girls teams. “Having the opportunity to coach at the (NCAA) Division I level is a dream come true for me.”

Moore joined ZCHS as an assistant coach in 2009. He became the girls varsity head coach the following year and added the boys varsity position in 2012. His decision to step down was based strictly on his desire to coach in college, and at Butler, in particular.

“After meeting with existing coaches and members of the Butler administration team, I knew instantly it was a perfect fit for me,” Moore said. “I also believe strongly in the mission of Butler athletics and the job they do promoting the best of their athletes, both in and away from competition. I was fortunate to be offered the position, and the rest is history.”

Outside of coaching, Moore is an assistant professor in the Dept. of Social Work at Ball State University. The coaching move from Zionsville to Butler won’t affect his faculty position at BSU.

Although he looks forward to the new chapter in his coaching career, he closes the book at Zionsville with a touch of melancholy.

“I will forever miss the generosity of the community, the warmth of our tennis families and the players that entrusted me to mentor and help shape their athletic and life talents,” Moore said. “I genuinely love the student-athletes at Zionsville and have incredible respect for (athletic director) Greg Schellhase and the other administrators. I could not have asked for a better nine years.”