Comedian W.C. Fields is credited with the line, “Never work with children and animals.” Anne Nicole Beck begs to differ. 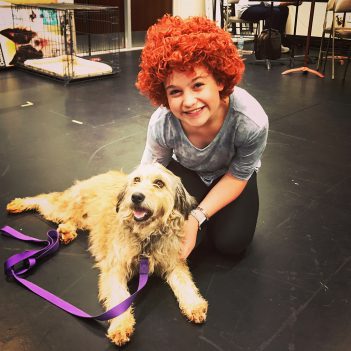 Mary Kate Tanselle, who plays the lead role in “Annie,” and Tori who plays her dog Sandy. (Submitted photo)

As director of the musical “Annie,” she is working with both — a talented young actress named Mary Kate Tanselle and another half-dozen school kids, and a curly-haired mutt named Tori. Mary Kate, an eighth-grader at Sycamore School, portrays Annie, and Tori, a foster dog from the Humane Society of Indianapolis, plays her dog Sandy, in the Tony Award-winning musical which opens Civic Theatre’s 103rd season Oct. 12 at The Tarkington in Carmel. A fundraiser will be held Oct. 12 prior to a 7 p.m. sneak preview performance.

“I actually love working with children, especially the ones in this cast,” said Beck, who also is choreographing the musical. “They are so extraordinary and have worked so hard taking on challenges and striving to get acting and singing and dancing moments all in synch. And Mary Kate is a director’s dream. She handles everything with professionalism and ease.

“Plus, I am a dog lover, so even though a canine actor may not be as consistent as a human, having the love and warmth and pure sweetness of a beautiful animal around has been incredible. The whole cast lights up when our Sandy is around.”

Based on the popular Harold Gray comic strip “Little Orphan Annie,” the Broadway musical focuses on a spunky, optimistic 11-year-old orphan who is looking for her birth parents. She is adopted somewhat reluctantly by billionaire businessman Daddy Warbucks, who eventually opens his heart to her.

Sandy, also a character in the comic strip, is the stray dog Annie rescues from a dog catcher.

Colleen Benson, director of Shelter Behavior at the Humane Society, and her staff initially met with Beck and her team to ask what types of behaviors the dog would need to perform in the show. They were told it was to run across the stage to Annie and follow her around. Tori has about 10 minutes of stage time.

“So we were thinking of a dog that could easily learn those things and be motivated by attention from people,” Benson said. “We also wanted to make sure the dog wouldn’t be completely overwhelmed by all the people, lights, sounds, etc.

“We set out thinking about dogs that are very people-social, not overly shy or sensitive, and would be interested in treats, too. It just ended up being perfect timing that we had a dog that fit the physical description of Sandy, and Tori ended up being the one.”

“Treats are everything,” Beck said.

Beck and her family are fostering Tori and have worked at home repeating what is asked of her on stage. Same dialogue. Same sequence. Eventually, she started to understand that only certain commands on or off stage meant to come running.

“At first, she was scared of everything and of affection but giving her unconditional love in our home has been good for her,” Beck said. “She absolutely adores being loved. Her tail wags constantly now.”

“Annie” runs at the Booth Tarkington through Oct. 28. For tickets, visit civictheatre.org.