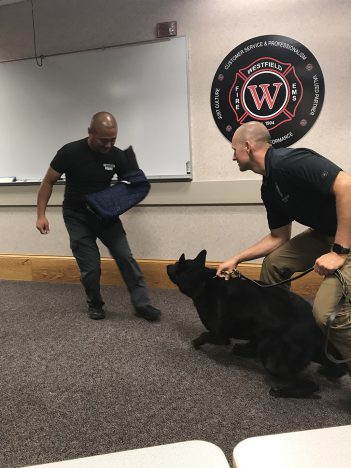 Officers Jeff Swiatkowski and Song Kang presented. Both are K-9 handlers, but only Swiatkowski’s K-9, Lopez, was present.

According to Kang, police departments began using K-9s as early as 1899, but the way  departments utilize dogs today has changed.

“They started out with German shepherds, and now you see all kinds of breeds,” Kang said. “Lots has evolved, just like any other training within law enforcement.”

Dogs are chosen based upon their drives, specifically their hunt drives. A second drive that officers such as Kang and Swiatkowski require is the fight drive. Lopez identifies objects as prey, such as the WPD’s bite sleeve.

“When you see Lopez come out and I have this sleeve on, I become his prey,” Kang said. “He’s happy because we’re training, and we always let him win. It’s all about having fun and working that drive to our advantage. You’d be amazed at how much these dogs would be willing to do for us.”

Swiatkowski presented on three awards he won at the recent K-9 Olympics at Von Liche Kennels in Denver, Ind. He and Lopez placed third in narcotics, second in three-man team and first in the obstacle course.

Swiatkowski demonstrated a drug search with Lopez during the class and then Kang donned the bite sleeve during the second portion of the demonstrations.