You are at:Home»Current in Zionsville»Zionsville Community»Zionsville Town Council president arrested for drunk driving 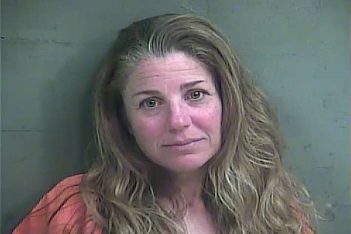 Zionsville Town Council President Elizabeth Hopper was arrested Sept. 25 for allegedly driving drunk on the south side of town.

According to a police report, at approximately 5:20 p.m. a Zionsville Police Dept. officer noticed a silver Subaru Crosstrek drive over a sidewalk and curb as it turned westbound on Hunt Club Road from southbound Ford Road. The officer went to check on the driver, later identified as Hopper, who had come to a stop and turned on hazard lights.

The report states that the officer noticed the smell of alcohol coming from the vehicle and that Hopper had put the “vehicle’s heat on full blast, which then masked any further odor,” even though it was approximately 90 degrees outside. Hopper denied drinking any alcoholic beverages that day, it states.

According to the police report, Hopper “stumbled to the sidewalk,” where the officer planned to conduct field sobriety tests. Hopper failed three of the tests, leading officers to conduct a portable breath test, which came in at .19 percent blood alcohol concentration. After the test, Hopper “admitted to having ‘a couple beers’ at home earlier in the day,” the report states.

The report states that Hopper asked if she could call ZPD Chief Robert Knox – which she was denied – as she tried to decide whether or not to submit to a chemical test. She eventually consented to the chemical test at ZPD, which registered a .221 blood alcohol concentration. Results above .08 percent in Indiana are considered over the limit. During the test, she repeatedly asked the officer if she could call Knox, Zionsville Mayor Tim Haak or Boone County Sheriff Mike Nielsen, the police report states.

Hopper did not respond to requests for comment. Haak declined to comment on behalf of the town.