As a member of the Walk to End Alzheimer’s recruitment committee, Margaret Curl figured she better have her own team. 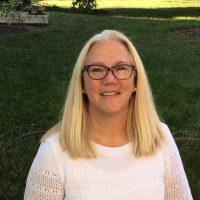 She partnered with her two older sisters on a team they named “Groundhog Day” after the movie where the TV weatherman, played by Bill Murray, keeps reliving the same day.

“Some people would find this a little morose, but we figure living with Alzheimer’s is kind of like living the same day over and over again, like the movie,” Curl said.

Curl’s mother, Shirley Cline, 82, was diagnosed early with Alzheimer’s in 2017.

“There is a different level of engagement when it’s something that hits you close to home,” Curl said.

Curl, a Carmel resident, will participate in the Indianapolis version of the Walk Sept. 30. The opening ceremony begins at 10:30 a.m. at Bankers Life Fieldhouse. There are one-mile and three-mile routes.

Curl, who is her mother’s caregiver, previously participated in the Walk to End Alzheimer’s as part of the Eli Lilly team for a few years.

Curl’s mother lives in the assisted living section of the Bickford of Carmel.

“We moved her in April from another nursing home,” Curl said. “They thought she was ready for memory care. My sisters and I didn’t agree, so we moved her. I still think she has a good amount of time in assisted living. As soon as she goes into the memory care, I think she’ll see a decline. We’re trying to keep her as independent as we can.”

After being diagnosed, Cline continued to live on her own for a couple of years.

“We moved her on her own into a nursing facility in 2012,” Curl said. “Her doctor said she would have a better transition if we moved her there earlier than a lot of people. She was still driving when she moved.”

Curl works in the medicines development unit for supplying external vendors with drugs for clinical trials, which includes Alzheimer’s. Lilly is statewide premier sponsor of the Walk to End Alzheimer’s.

Curl’s sister, Emily Cline, is a physician in Greenwood. Her other sister, Eleanor Trent, lives in Sonoma, Calif. Curl said both always donate to the walk.