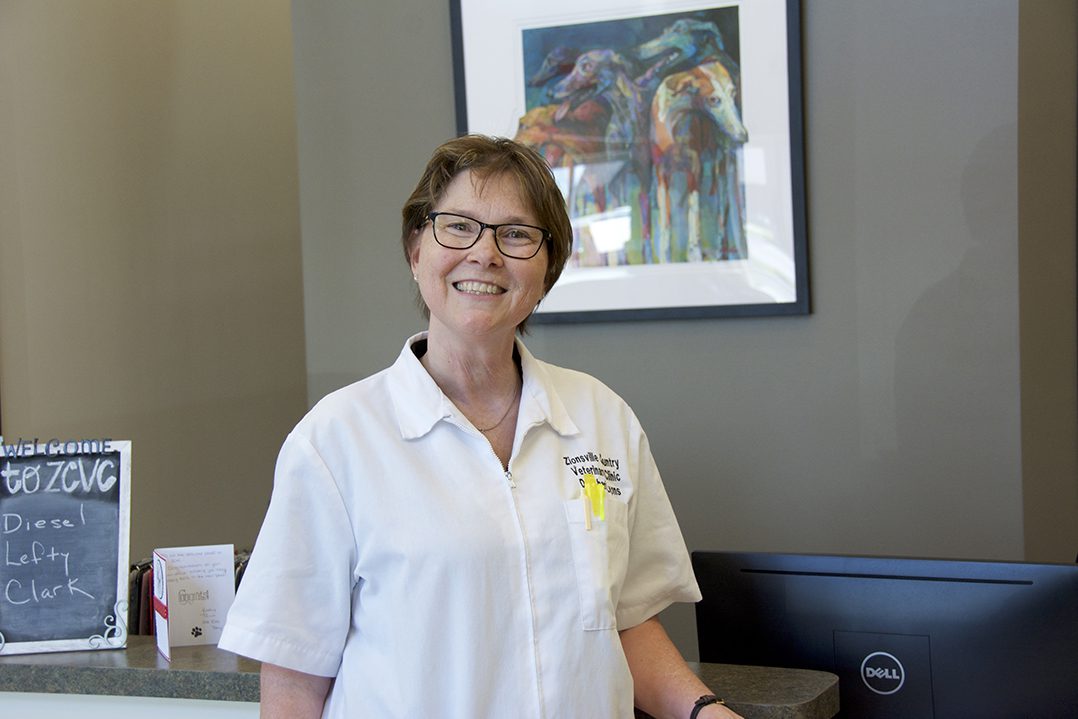 In a veterinary clinic built specifically to create a calming experience for pets, a special room by the lobby can be just as calming for humans.

“This is one of my favorite spots,” said Dr. Shari Lyons, walking into the Cattery of her vet clinic.

The ceiling is vaulted to the top of the second story. Windows high and low provide natural light. Small chairs are affixed to walls at various heights, and cubbies provide hiding spaces for five cats whose heads occasionally emerge curiously.

“It’s been a challenge to create a room where the cats can have freedom but not get out,” Lyons said.

Several of the cats were abandoned by their owners. Others are adoptable.

In the newly constructed clinic at 6971 Central Blvd. in Whitestown, the Cattery is one of the unique aspects. The goal is to make the experience as fear-free as possible for the animals.

“The whole thing has worked out just the way I planned,” said Lyons, who owns the clinic with her husband, Dr. Rick Lyons.

“It just makes me smile every day,” she said. “I knew that (fear-free) was the goal, but I’ve just been really impressed with how it actually worked.”

The facility opened in February, designed with animal comfort in mind. A separate entrance for cats leads to the front desk by a side door, with hallways and dedicated exam rooms keeping felines and canines out of one another’s sights. Soft tile floors on the canine side are gentle on older dog’s joints and reduce the noise of toenail clicks, which in turn helps reduce anxiety for some cats.

Four of the six canine exam rooms face exterior windows, but for dogs who might easily be distracted by the outdoors, two other exam rooms have windows high in the ceiling, which ensures that every exam room has some form of light.

“Even though there’s not a window here, and that helps with distraction, the patient is still getting natural light,”  Operations Manager A.J. Keesee said. “We knew we wanted these interior rooms but somehow incorporate natural light.”

When patients finish their appointment they can check out directly from their exam rooms before leaving via a separate canine exit, something Keesee said is the highlight he hears most from patients.

“I love being able to check the clients out in the exam room, having their own exit,” he said. “I didn’t think it would be that big of a deal.”

“It makes sense when you’re at the front desk trying to hold your dog and other dogs are coming in,” Keesee said. “By that point the dog’s finished.”

For dogs anxious about visiting the vet, two outdoor exam rooms surrounded by outdoor fencing are available when the weather cooperates.

“For some dogs, this wouldn’t be a good fit,” Keesee said. “There’s too many distractions, too much noise, but some dogs get so worked up just coming into the building.”

The new building has larger surgery prep rooms, increased space for dental cleanings and separate monitoring rooms for cats and dogs requiring post-operative rest. A comfort room for bereavement aims to ease euthanasia for pets and owners with a separate exit. It also has a  comfortable floor mat and a private area for saying goodbye outdoors.

The move on the other side of I-65 has been big for clients, too, increasing visibility and making the facility easier to find. The staff sees 35 patients on average each week, with roughly 60 percent being dogs.

But overall, the best part for patients is ensuring they don’t fight like cats and dogs.

“Before you would walk in and there was no separation between feline and canine,” Keesee said. “Having this separation and having this circular flow is probably the biggest difference for us. It’s worked out really well.” 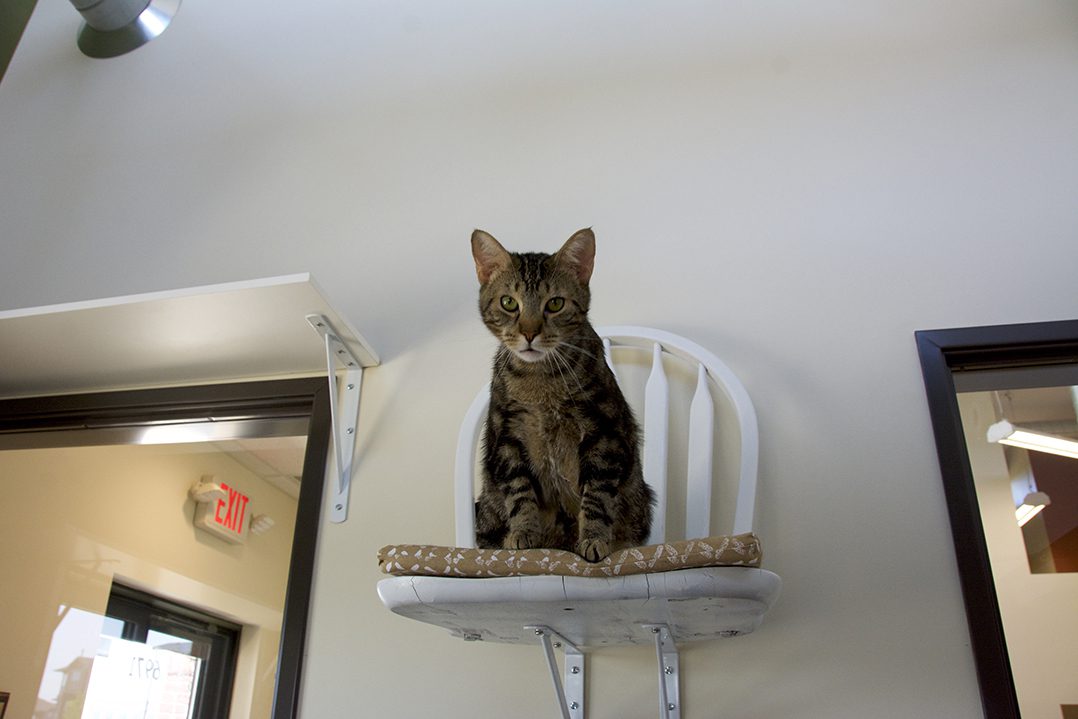 A cat peers down from an elevated chair in a room specially designed to allow cats to roam and interact with visitors at Zionsville Country Veterinary Clinic. (Photo by Lisa Price)

The fear-free initiative was started by veterinarian Dr. Marty Becker, who created a task force with other behaviorists and animal trainers to devise standards of practice to make vet visits as calming as possible.

Although the standards will officially be released next year, Zionsville Country Veterinary Clinic is one of the first in the nation to be built from the ground up to incorporate the standards.

Dr. Shari Lyons said the timing was perfect because she was considering a new facility when the initiative was underway.

“I just took the pages of information and tried to put as many of those things as possible into my building,” she said. “All the scientific stuff that went into it would say this would work, but you never know. You try it.”

The feedback from pet owners is that their pets have had very positive, calm experiences, which has amazed Lyons.

“This is still a veterinary clinic. Dogs and cats are not stupid,” Lyons said. “I was pleasantly surprised.”

Although many veterinary offices can make adjustments to facilitate a fear-free or low-stress environment, changes like separate dog and cat entrances and exits aren’t usually feasible in an existing building. Veterinary architect Heather Lewis compares it to the development of children’s hospitals, with an experience that caters to the comfort of the patient.

“Because the accreditation standards for practices don’t exist yet, those who are doing it now are really pioneering,” Lewis said.