Andrea Laxton describes it as a happy homecoming.

The 2007 Carmel High School graduate will appear as the lead character of Molly in “Ghost, The Musical,” Oct.  5 through Nov. 18 at Beef & Boards Dinner Theatre in Indianapolis. 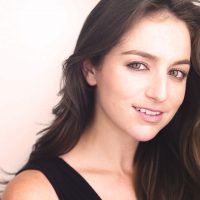 “With the exception of national tours coming through town, this is my first time performing locally in Indy,” said Laxton, whose maiden name is Rouch. “I couldn’t be happier to come home for a couple of months. Both my parents still live in Carmel, so there will be a lot of supportive family and friends coming to see the show.”

Laxton credited the CHS performing arts program for her success. When she was younger she competed in gymnastics and other sports. As a freshman, she took choir as an elective. Laxton said it was the first time she realized she could sing.

“I subsequently tried out for show choir and made it into Accents and later the Ambassadors,” Laxton said. “My first musical ever was ‘Beauty and the Beast’ at CHS. I was a plate, and years later it was my first national tour (playing Belle). The performing arts program at CHS allowed me to find my love and passion for performing. Between show choir, musicals and orchestra, I caught the bug and quickly realized theater was something I wanted to pursue as a career. I feel very fortunate for the experience and opportunity I gleaned from CHS. It’s something I don’t take for granted.”

Laxton said she absolutely loves playing Molly, a role she understudied for on the U.S. tour and internationally.

“She’s a confident, optimistic, resilient artist, and I find her journey of love and loss very relatable,” Laxton said. “The show explores the pain of losing someone you love and chronicles the stages of grief. Molly sends the message that there is life after loss. It’s one of my favorite and more challenging aspects of the role. Molly spends most of her show dealing with the loss of Sam, so as an actor, it’s important to know how to snap out of it between shows. Luckily, I have had a good amount of practice by now.”

Laxton said Molly’s songs are some of her favorites to sing.