You are at:Home»Current in Carmel»Carmel Community»Carmel cyclist rides every street in city 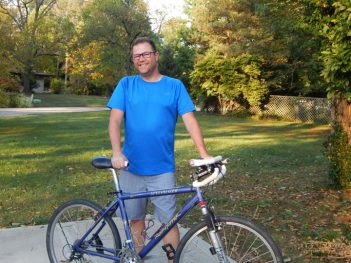 Bob Raduchel logged 1,230 miles on his bike riding every street in Carmel this year. (Submitted photo)

Last year, Bob Raduchel dusted off the bike he’d set aside 16 years ago when the first of his two sons were born. He replaced the knobby tires with street slicks and started riding again.

“I was happy to ride 8 miles at first. Within a couple of months I could ride 100 kilometers without a problem,” he said. “I pounded out a lot of miles last year that was predominately north, south, east, west or the Monon.”

But those rides got a bit stale after awhile, so Raduchel, 49, decided to do something more difficult with different scenery: Ride every street in Carmel. The first leg was on a warm day in February. The majority of the legs were June through August. He finished just before Labor Day, logging a total of 1,230 miles.

To plan his route, Raduchel used Under Armor’s Map My Ride app, which tracked and saved the streets he rode on a visual map. He tried to do at least 1 square mile at a time but had a couple instances where he missed a tiny section and had to ride back to the neighborhood to clear it. Each ride started from his house near 96th Street and Shelborne Road.

“It occurred to me that I could just drive to a part of town and ride it but decided that would be cheating,” he said. “The interesting thing about the journey is that I would estimate about 50 percent of my miles were on roads ridden twice to dozens of times. There are only so many ways to commute to a neighborhood from my house, so I would find myself on the same roads going to and from different sections of town. I learned early on that I should study the map of the specific neighborhoods I intended to ride to make it as efficient as possible.”

Raduchel rode about three times a week, usually at night after work (headlight in place), and one day on the weekends, averaging 40 to 70 miles a trip. The average was right around 50 miles with the longest ride at 85 miles.

“Night riding in Carmel is a blast. There is almost zero traffic on the main roads, and the neighborhoods have virtually none. Plus it is a lot cooler out,” Raduchel said. “I only got caught in a storm twice. Once I was able to duck out of it in the Monon tunnel at 116th Street, and the other I just kept on riding.”

There are a few roads, however, he won’t ride again, including 96th Street on the west side, calling the fast traffic on a narrow road “the worst.”

Raduchel only had one encounter with a dog.

“An energetic shiba inu came after me. That little dog could really move,” he said. “I can truly say that Carmel drivers are extremely courteous to cyclists. Only one close call, and I suspect I was the one to blame.”

As for what’s next, Raduchel said he’s burned out on the neighborhoods so he is considering some longer distance riding.

“After doing 85 miles in the neighborhoods one evening, 100 on the open road should be a piece of cake,” he said. “After that I’m not sure, maybe shoot for 5,000 total miles next year.”