You are at:Home»Night & Day»Gaynor thrilled to be inducted into Songbook Hall of Fame

Mitzi Gaynor isn’t sure if she will sing at her upcoming Songbook Hall of Fame induction. One thing for sure is she won’t be able to show off famous dancing moves.

While rehearsing for a tour in August, Gaynor broke her foot. 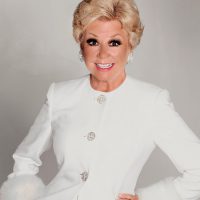 Stumbles are rare for the legendary singer/dancer/actress, who will be inducted into the Songbook Hall of Fame Sept. 30 at The Palladium in Carmel. The dinner part of the gala is sold out but tickets remain for the second half, which begins at 8:30 p.m.

“I love it, I love it,” Gaynor said of the induction. “It’s just wonderful. This man (Michael Feinstein) is so marvelous. He’s so wonderful, I can’t stand it. He’s such a fine human being and so talented. He wants me to be in this (Hall of Fame). It makes me want to cry, it makes me so happy. I’m so proud of it. Not many people have ever done this.”

Feinstein is the artistic director for the Center for the Performing Arts and Songbook Foundation founder.

Gaynor will be inducted along with Ella Fitzgerald and Ray Gilbert, both deceased.

“Ella was a friend of mine. She used to live down the street in Beverly Hills,” Gaynor said.

Gaynor has great praise for Kristin Chenoweth, who will perform at the Gala.

Following her movie career, Gaynor did a series of TV specials in the 1960s and ’70s.

Gaynor said her show, “Razzle Dazzle! My Life Behind the Sequins,” features music and stories from her past.

Appearing before a live audience still thrills her.

“There’s nothing like it in the world,” said Gaynor, who enjoys bantering with the audience. “It’s so much fun. I feel like I’m with my family, no, better than your family because your family is always such a pain in the (butt).”

Gaynor said she will retire the first time she doesn’t sell a ticket.

“Or the first time I don’t feel like I can’t wait to get to the theater to rehearse, then I’m going to quit,” Gaynor said.

Gaynor made her movie debut at 19 in “My Blue Heaven” in 1950. She appeared with Ethel Merman and Marilyn Monroe in “There’s No Business Like Show Business” in 1954.

Perhaps her most recognizable movie role was as Ensign Nellie Forbush in Rodgers & Hammerstein’s “South Pacific” in 1958.

Feinstein and Songbook Ambassadors Annie Yokom (2010), Julia Goodwin (2013) and Finn Sagal will be part of the show.

Where: The Palladium, at the Center for the Performing Arts.

Ray Gilbert: Best known for writing lyrics to Academy Award-winning song “Zip-a-Dee-Doo-Dah” from Disney’s 1946 classic “Song of the South.” Gilbert also wrote “You Belong to My Heart,”  “Sooner or Later” and “Casey at the Bat.” Gilbert died at /// in 1976.

Ella Fitzgerald: Known as “The First Lady of Song,” Fitzgerald was one of the most popular singer in the U.S. for more than half a century. She sold more than 40 million albums and won 13 Grammy Awards. Fitzgerald won two Grammys for two Songbook projects, singing Irving Berlin and Duke Ellington. Fitzgerald died in 1996 at age 70.