You are at:Home»Current in Westfield»Westfield Community»Citizens’ Academy participants learn about and have opportunity to fire police weapons

For the Sept. 13 Citizens’ Academy, participants took a short road trip to Lebanon to the Boone County Shooting Range. 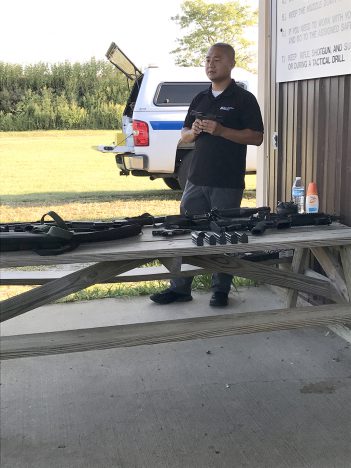 Westfield Police Dept. Officer Song Kang is a firearms instructor as well as the department’s armorer, and he gave a presentation on WPD weapons to class members. After the presentation, we had the opportunity to shoot the duty and off-duty pistols carried by WPD officers.

A typical officer carries four weapons – a shotgun, a duty pistol, an off-duty pistol and a semi-automatic assault rifle. Officers such as Kang also have the ability to carry a submachine gun.

Although we weren’t allowed to shoot the shotgun, semi-automatic or submachine gun, we were able to observe Kang and other officers demonstrate shooting those on the range. We did have the opportunity to shoot the duty pistol and the off-duty pistol, which I took full advantage of.

Next week, the column will highlight the duties of K-9 officers.