You are at:Home»Current in Zionsville»Zionsville Community»Jog-a-Thon to benefit Zionsville elementary schools 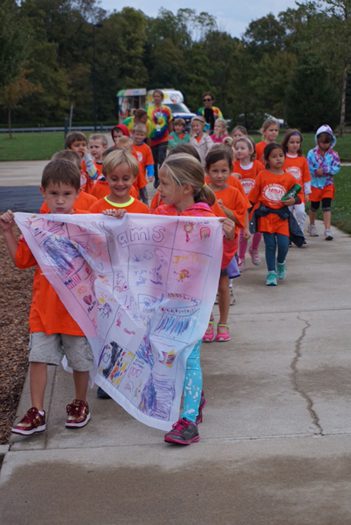 The seventh annual event occurs simultaneously at the five elementary schools. Fyffe and volunteers representing each of the schools begin planning in January, pooling their resources for sponsorship and general expenses.

Although overall planning is the same throughout the district, each school puts its own twist on activities. At Union Elementary, each student receives a medal with the number of laps completed written on the back. Last year, Fyffe had the idea during the Olympics and brought it back this year because of its popularity.

Union also rewards the class raising the most money with a special activity with Principal Jennifer Raycroft, who has been made into an ice cream sundae in the past. Along with the vice principal, Raycroft has been duct-taped to a wall, had a silly string fight with students and been soaked in a dunk tank.

“I want to make it fun for the kids and fruitful for the school,” Fyffe said.