The Carmel High School soccer team is doing its part to bring awareness to Indiana’s Lifeline Law and honor the memory of a former team member. 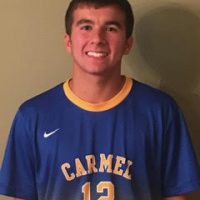 On Aug. 5, 2012, Brett Finbloom died from alcohol poisoning not long before he was supposed to leave for his freshman year at the University of Oklahoma. His friends were afraid of getting in trouble for underage drinking and waited too long to call for medical help. In 2013, State Sen. Jim Merritt authored the Lifeline Law, which provides amnesty from prosecution to anyone who calls or texts for help for someone in need of medical attention.

The Indiana Youth Services Association started the Make Good Decisions program after Finbloom’s death. The Greyhounds’ Pack the House soccer game versus visiting Columbus North at 8 p.m. Sept. 29 will be used to promote that program for the fourth time. Speakers, including Merritt, will discuss the dangers of underage drinking and the Lifeline Law at halftime.

For CHS soccer player Tommy Abbenhaus, the connection runs much deeper than others. His older brother, Steve, was a former teammate of Finbloom.

“He was really good friends with my brother,” Abbenhaus said. “It is more personal to me than some of the guys on the team, because I knew him. He was over to my house sometimes.”

Finbloom’s parents, Norm and Dawn Finbloom, have made presentations to high schools and colleges to spread the word about the Lifeline Law.

“Their mission is for others to learn from what happened to Brett,” Abbenhaus said. “It’s usually one of the games we most look forward as a player as we try to bring a lot of people out there. You see your buddies out in the stands learning about this.”

Free bracelets, lanyards and drawstring bags imprinted with the Make Good Decisions message will be given to spectators.

“Every single day I see a person in school wearing a Make Good Decisions T-shirt on,” Abbenhaus said. “The message is definitely getting out. At last count, 39 lives were saved by the Indiana Lifeline Law.”