When Eugene Warrington died at the age of 95 last week, hundreds of people laid flowers at his site. Not the site of his grave, but of his grill, the home of the greatest hot dog money can buy, just minutes from my childhood home in New Rochelle, N.Y. 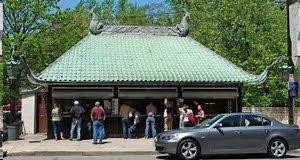 When I was young, it didn’t take much money: two dogs for a quarter and a watery orangeade for another dime. The line at Walter’s Hot Dog Stand began forming about 10  a.m. in front of the food stand, inexplicably a Chinese pagoda. While waiting, customers could read postcards affixed to the outside of the building from locals traveling abroad who missed their Walter’s fix.

The coveted fare was simply a dog, a bun and some mustard. Each hot dog was butterflied with a small knife so two sides of the meat could sizzle on the well-oiled surface. The buns were carefully laid out on another grill, which was lightly drizzled with butter.  You had two choices for toppings: mustard or extra mustard. Abstainers were scorned.

Each order was wrapped in tissue paper, the last inch of bun and meat peeking out. Those slathered with extra mustard were completely enclosed, making them more easily identified and preventing the inevitable ooze before the first bite. I had my share of stained shirts, a badge of honor for all Walter’s aficionados. The mustard, by the way, was a secret recipe. Everyone knew there was a hint of relish, but that was the only hint you got. You can buy the mustard online. I looked at the ingredients. There’s something they’re not telling us.

All you could get at Walter’s for decades was a hot dog and a drink. In the 1990’s, they added fries. People feared the place was  becoming too McDonaldsy.

When I am back in my hometown, I run into old high school classmates who either still live in the area or, like me, make their pilgrimage to the pagoda, a must-eat stop on every return trip. The building still looks exactly the same, almost frozen in time. Which reminds me: They sell ice cream now, another diversion from the original concept. And another source of disgruntlement from grouchy old frank-o-philes like me.