John Proffitt enjoyed being an attorney so much that he didn’t retire until he was 83.

“I loved the work, and I loved the people,” said Proffitt, adding he was always proud to be a lawyer.

Now 85, Proffitt still goes into his office at Altman Poindexter & Wyatt LCC in Carmel each day when he is not traveling or at his  home in Sarasota, Fla. Proffitt is “of counsel” to the firm, which means he retains a relationship to the firm. 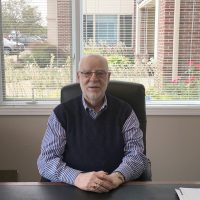 Although no longer practicing, John Proffitt still goes into his office at Altman Poindexter & Wyatt LLC in Carmel. (Photo by Mark Ambrogi)

“It makes us smile every day we do see him when he’s in town,” Attorney Anne Poindexter said.

Proffitt, who practiced law for 55 years, will be presented the Indiana Bar Foundation’s 2017 Legendary Lawyer Award Sept. 21 at Ritz Charles in Carmel.

Proffitt misses the relationships with other lawyers most of all.

“I had a lot of friends in the legal business, used to see them a lot and now I don’t see them as much,” Proffitt said. “Lawyers tend to be friends with other lawyers.”

His specialty was civil litigation. Proffitt was part of Campbell Kyle Proffitt, which dissolved in April 2016.

Poindexter, who had been with Campbell Kyle Proffitt since 1988, said part of the definition of legendary is being remarkable enough to be well-known.

“John is well-known throughout the state of Indiana not because he worked hard to be well-known. It’s in recognition of his commitment both to the profession and in recognition to the community,” Poindexter said. “I’ve known of John Proffitt since I was a young girl. It was my good fortune to grow up living down the street from him. I was able to observe his community involvement. As I became older and went to law school myself, it was my good fortune to be mentored by him as a young lawyer. He sat me down and told me that was an absolute obligation of our profession to give back to the community where we practice and live.”

Proffitt was president of the Indiana State Bar Association during its 100th anniversary. He has worked with many civic groups and served on boards through the years.

“I was president of (Carmel Civic Square Building) corporation for the City of Carmel, and our charge was to take bids, award contracts and build what is presently City Hall and the police station,” Proffitt said. “That didn’t have anything to do with being a lawyer, it had to do with being a citizen of Carmel.”