You are at:Home»Current in Noblesville»Noblesville Business Local»Westfield chiropractor offers help to returning veterans

The tragedy of the Sept. 11 terrorist attacks had a profound impact on Dr. Soong Ahn. 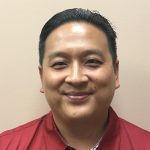 The South Korea native, who moved to the U.S. with his family when he was 11, was in New York City the day before the attacks in 2001. He then left to start at his first day of studies at New York Chiropractic College Sept. 11 in Seneca Falls in upstate New York.

“A secretary runs in and said, ‘Everybody go home, a plane just flew into the World Trade Center,’” said Ahn, who grew up in Chicago. “We thought it was a sick joke at first because about 25 percent were from the New York City area. She wasn’t kidding, and in a few minutes, we knew what was going on. From then on, I wanted to do something.”

He certainly has. Ahn, a Westfield chiropractor who has been in practice for 14 years, has been seeing Iraq and Afghanistan veterans for no cost since he started. Ahn, 40, estimates he has seen approximately 25 veterans per year.

“Number one, they (the returning veterans) are all hurting, literally,” said Ahn, a Carmel resident who also has offices in Plainfield and Greenfield. “Even if they were not injured in some way, we are talking about soldiers who had to carry 90 to 100 pounds of gear at one time. So naturally,  their body just breaks down. A lot of time they don’t see it as a related injury, so they don’t get the care they need. Sometimes it takes so long for things to process, they are in limbo for a while. When they come in because they need to some help, they are expecting to pay out of pocket, and I just take care of them.”

Ahn said everyone should show their appreciation for those returning from Iraq and Afghanistan.

“It’s a way I can give back as a citizen to those who helped protect our freedom,” Ahn said. “Many will break down in my office and say this is the nicest thing anyone has done for them since they’ve been back.”