You are at:Home»Current in Carmel»Carmel Community»Creekside student attends Space Academy

Sarah Crook has always had a keen interest in space.

So when she learned she could apply to attend the Space Academy at the U.S. Space and Rocket Center, NASA Marshall Space Flight Center’s Official Visitor Center in Huntsville, Ala., she was quick to do so. 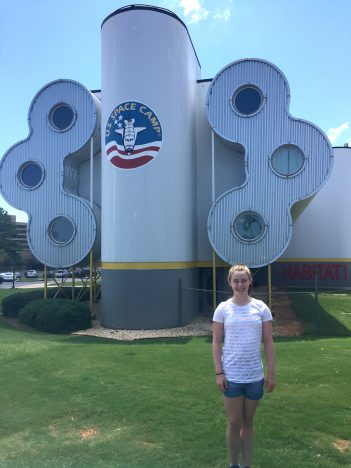 Crook, a seventh-grader at Creekside Middle School, graduated from the week-long Space Academy, which ended in August.

“I really like the missions we had that were a long, complex version of a simulator,” Crook said. “We were each assigned a role and we had this particular script to follow. There were anomalies for us to solve off script, and it felt really realistic. An example would be if some of the space shuttle doors weren’t closing, you have to instruct the pilot what to do.”

Crook, 12, spent the week training with a team that flew a simulated space mission to Mars.

“We had a section on astronomy, and I re-learned everything I knew,” Crook said. “That’s what made me want to go to space camp.”

Crook was one of 15 members in the group, which included four girls.

The educational program trains students with hands-on activities and missions based on teamwork, leadership and problem-solving.

Crook said she might consider going back for Advanced Space Academy when she gets a bit older.

“I might want to have a career (in space) or a related field,” she said. “Science and math are my two favorites.”

Space is only one of her interests. She plays Carmel Dads’ Club soccer and is a cheerleader at Creekside. She also enjoys gymnastics and water skiing.