You are at:Home»Current in Carmel»Carmel Business Local»Poker superstar comes up aces at Carmel-based TCC rally

So naturally Jason Buck, vice president of marketing for Carmel-based TCC, said six-time World Series of Poker champion and two-time World Poker Tour champion Daniel Negreanu was the perfect person to address the crowd Aug. 30 at the Indiana Convention Center in  Indianapolis. TCC is one of the nation’s largest Verizon Premium Wireless Retailers. 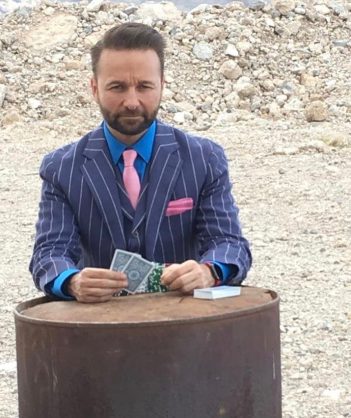 “We wanted to bring in someone who is the best in their profession to inspire our store managers and field leadership team,” Buck said.

Fortunately for Buck, his lifelong friend, Brian Balsbaugh, is the agent for several of the world’s top poker players, including Negreanu.

“I called him to help me brainstorm, and he said why don’t you just have Daniel come in,” Buck said. “He’s the undisputed money leader ever in professional poker (more than $34 million). I didn’t even know that was a possibility, but he said Daniel was looking to share inspirational messages. It really worked out well. Daniel was incredibly engaging, not just on stage, but throughout the course of the rally he really made himself available to all the attendees.”

Negreanu, who grew up in Toronto and lives in Las Vegas, was impressed with how TCC set up his talk.

“I’ve done several things similar to this, but nothing as professional and as well-done as TCC put together,” Negreanu said. “The goal is to inspire people to get past this idea that things are just the way they are and there is no place to go from there. I like to open up possibilities.  Maybe there are other things you can do.”

Negreanu, 43, said if you are convinced nothing is going to change, it won’t.

Negreanu said he loves when people realize they can pursue their dreams. Negreanu chased his dream of playing poker as a teenager.

“I worked at Subway for a month, I was a telemarketer for a day, but other than that I didn’t have any jobs,” Negreanu said. “I was lucky to find my passion at an early age. I understand to be successful and be the best at what I do, I had to devote my life to it. You don’t see the top tennis or top golf players just occasionally play tennis or golf. They commit their life to it, and that’s what I did in my late teens.”

A documentary on Negreanu’s life called “KidPoker” is on Netflix.

“All the success I had came from failure,” Negreanu said.

Now he gets his kicks from giving motivational speeches.

“I play poker for million dollar pots, and I don’t get the adrenaline rush from that like I do from speaking in front of a crowd,” Negreanu said. “Poker is my comfort zone. I’ve been doing it for 20 years, that’s easy. This is something I want to challenge myself with.”