You are at:Home»Current in Carmel»Carmel Community»Chive Charities raises funds for Carmel family to receive wheelchair-accessible van

The big thing is the van name 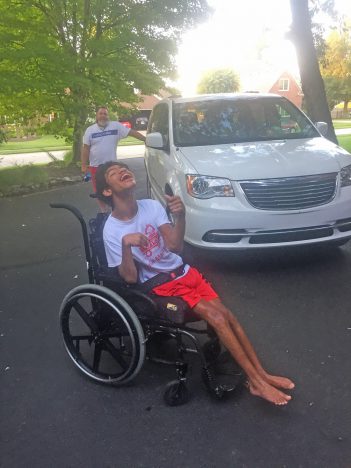 After hearing Hadden’s story of her physically disabled son, Charlie, Chive Charities was raised $49,000 to donate a wheelchair-accessible van, a fully loaded 2016 Town and Country, to the Hadden family. The van was purchased from Superior Van and Mobility in Fishers.

“We’ve had a need for a wheelchair-accessible van for five years,” Hadden said. “Our van was falling apart. We were going to have to purchase a van, and we were trying  figure how we were going to do that. It’s extremely humbling to receive charity. I feel guilty, but at the same time our son’s life is going to be so much better because of it.”

Hadden said Charlie, a 15-year-old Carmel High School freshman, can get himself in and out of the new van.

“Before, I had to do it all for him,” Hadden said. “To have an organization take a humongous burden off of our shoulders and give us something like this is awesome. You have to fight for everything when you have a special needs child. For once, you have someone that backs you.”

Charlie was adopted as an infant. At 9 months old, a CAT scan showed Charlie had schizencephaly, a rare brain disorder which can cause physical and cognitive limitations, speech and language delays, epilepsy and cerebral palsy. Hadden said it was discovered he had a stroke in the womb during the first trimester.

“He’s doing way above what (doctors) said he would do,” Hadden said.

Hadden said her friend, Quynhmy Raley, hounded her to sign up for the charity to receive a better wheelchair.

“But in my research there weren’t any better than the one we had,” Hadden said. “They asked if there was anything else we need, and I said we really need a new van but had no idea they would purchase a new van. My head is still spinning about it. It just makes our lives so much more accessible.”

Hadden said before adopting Charlie, she had no idea what the expenses would be for caring for a child with his type of special needs.

Her husband, Sean, has a painting business. Jenni is the worship leader at her church, Christ’s Community Church in Fishers. They both are in a rock band called the Jennerators. Charlie has two older adopted sisters, Savannah, 23, and Chloe, 19. Savannah Moore, who is married, has a baby daughter, Clara Mia Moore.

Chive Charities is a branch of the site thechive.com and has raised more than $7.5 million for those in need. For more, visit chivecharities.org.