You are at:Home»Current in Zionsville»Up With People strives to leave good impression on communities, families 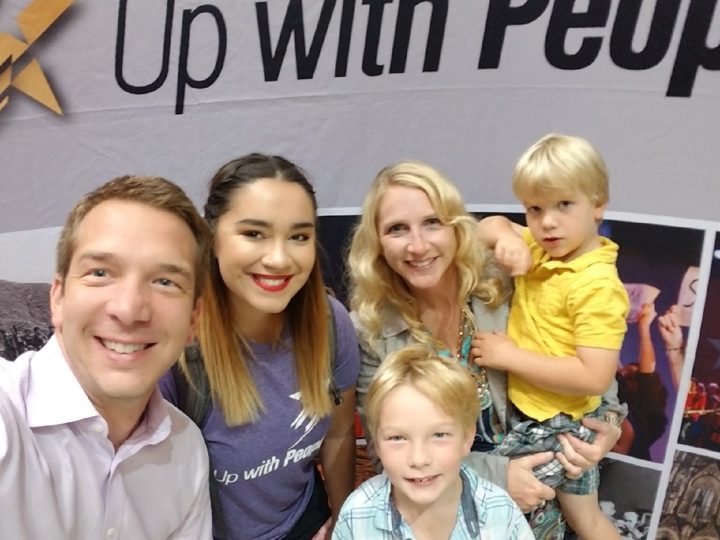 Wherever they go, the cast of Up With People tries to help communities they visit.

Each week they make a mark in a new city by volunteering in schools, homeless shelters or animal shelters. In Zionsville, their focus was helping children, which brought them to the Boys & Girls Club one evening to play soccer and games with students before painting areas of the buildings. 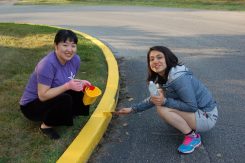 Miki Kasamatsu and Mai Yuda from Japan paint the curb at the Boys & Girls Club. (Photo by Heather Lusk)

Members of the Up With People cast come from 15 countries and 23 states. They are on the road until December, visiting 15 cities throughout the U.S., Mexico and Europe. Participants range in age from 17 to 29 and stay with host families wherever they go.

Many become part of the organization because of previous ties. Hidde Meurs from the Netherlands was inspired to join Up With People after his family was a host for the program years earlier. Meurs was introverted in school and faced personal challenges but has found the perfect outlet in Up With People.

“Here, I can be myself,” he said. “There’s no judgement in Up With People.”

“When else do I get to do that?” she said. “It combined a lot of different things.”

Even Kristie Goehausen, who hosted one of the participants, knew she wanted to offer her home after remembering an Up With People performance she enjoyed as a child that had a lasting impact on her when We Are the World was popular.

She hopes the experience will have a similar effect on her sons.

“I hope they have a pen pal for life,” said Goehausen, who was impressed that the program builds awareness for alternative opportunities after high school and college.

A Youtube channel, UWPonTour, allows the public to follow a weekly vlog of their activities in each city.