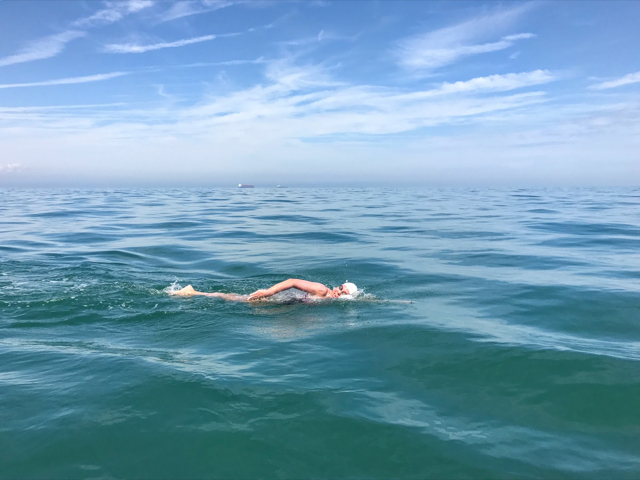 Rather, it was the fact that the person who prepared her for the grueling swim from England to France wasn’t there to see it.

“While swimming for hours, I am always curious what emotions or feelings will come to the surface,” Smith said. “This time, it was anger and sadness. I was angry that my coach, Anne, died.”

On Aug. 14, Smith – a Carmel native and former standout on the Carmel High School girls swimming team – completed a lifelong goal of swimming across the English Channel. She covered the 28 miles from Samphire Hoe, England, to Cap Gris Nez, France, in 11 hours, 13 minutes and 11 seconds.

Now a resident of Chattanooga, Tenn., Smith, 43, began training for the swim two years ago under the direction of renowned distance swimming coach Anne Cleveland, who died of pancreatic cancer two months before Smith’s swim. The sad timing was extra motivation for Smith to complete the crossing, especially “when the darkness comes,” her term for “the tough parts in long swims.”

When crossing the channel, “the tough parts” encompass everything from frigid water, rough swells and marine life to thirst, hunger and mental and physical exhaustion. It was during the height of those lonely times that she drew strength – not despair – from the memory of her coach.

“The anger moved to sadness and into a peace, peace that she was there but in a different way,” said Smith, an accomplished triathlete, swimming coach and yoga instructor. “I believe that my practice of meditation and yoga helps me to see these dark thoughts as temporary and passing. Many times our bodies are completely capable but our minds get in the way.”

Smith, who graduated from CHS in 1992 and has lived in Chattanooga for 16 years, has aspired to swim the Channel since first grade. She trained with Cleveland by swimming in the Tennessee River during the winter, with water temperatues as low as 42 degrees.

Smith received additional help and inspiration from her “crew,” i.e., her husband Will Smith and sons Max, 15, and Zane, 13. They accompanied her in a boat and cast her water bottles, sweet tea, carbs and electrolytes every 30 minutes with a fishing reel.

“It was a surreal and euphoric experience,” Smith said. “When I climbed out of the water on the kelp-covered French boulders, my feet had to clear the water, and I said to myself, ‘I did it, I made it.’ I believe I was a bit surprised to be finished, and it was somewhat bittersweet. A long journey was completed.”