You are at:Home»Current in Carmel»Carmel Business Local»Square Donuts “closed for reorganization” after gnats, other violations found at Indianapolis bakery 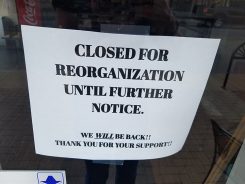 Square Donuts on Range Line Road in Carmel has “closed for reorganization until further notice” according to a sign in its window.

The closure comes after the Marion County Health Dept. found four critical violations at the Square Donuts bakery, 6416 W. Washington St., Indianapolis. A complaint spurred the health department to investigate the bakery Aug. 14, and as a result of its findings it ordered the bakery to close until it had taken steps to address some of the problems. 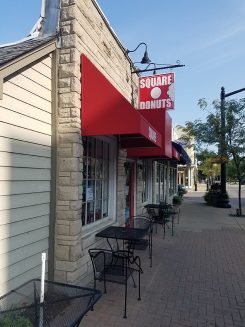 “This facility has an extremely heavy gnat infestation,” states the Aug. 14 Food Service Establishment Inspection Report. “This has been a problem in the past. This issue must be addressed and eliminated. A closure notice was issued today and all gnats must be eliminated and the facility completely cleaned in order to be reopened.”

Officials from Square Donuts did not respond to multiple requests for comment. The Carmel location did not have any critical violations in its last inspection, conducted April 4 by the Hamilton County Health Dept.