You are at:Home»Current in Carmel»Carmel Community»Indianapolis man, 12-year-old boy arrested for armed robbery

An Indianapolis man and a 12-year-old boy have been arrested for an armed robbery of a store near the Carmel and Zionsville border. 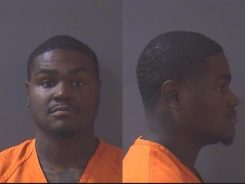 Jalen Joiner, 23, and the 12-year-old boy are accused of robbing the AT&T store at 10485 N. Michigan Road at gunpoint the afternoon of Aug. 19. Police said the robbery suspects forced employees to turn over merchandise worth several thousands of dollars.

Indianapolis Metropolitan Police Dept. officers located the suspect vehicle soon after the robbery. After a brief foot pursuit, they apprehended Joiner and the juvenile.

Joiner has been charged with robbery, theft, contributing to the delinquency of a minor, unlawful possession of a firearm by a serious violent felon, pointing a firearm, carrying a handgun without a license, criminal confinement and intimidation. He was transported to the Hamilton County Jail with bond set at $500,000.

Charges against the boy are pending. He was taken to the Hamilton County Juvenile Center for processing.