You are at:Home»Current in Zionsville»Photo showing challenges of motherhood goes viral 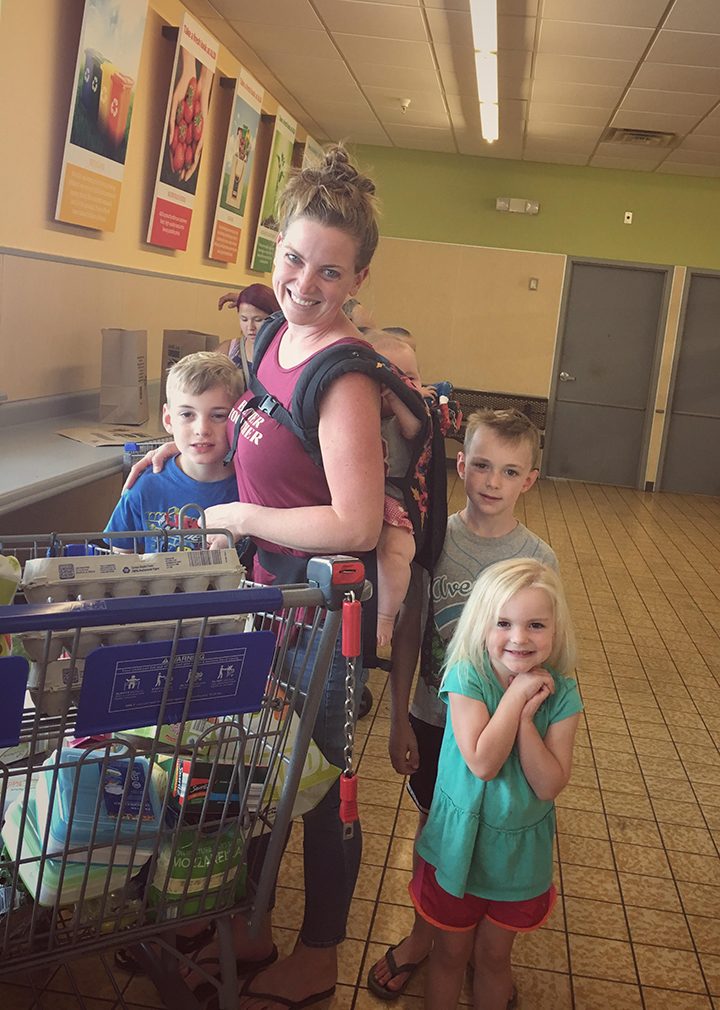 A stranger at the grocery store took this photograph of Jess Wolfe with her four children: Zion, 7, Ezra, 6, Ireleigh, 3 and Salem, 6 months.
Original photo caption: “Sweaty, baby strapped to my back, three year old insisting that her belly hurts and NEEDS her donut that she forgot to eat after lunch, 6 year old using everything in sight as a weapon, 7 year old wanting to spend the only dollar he has. This. This was my trip to the grocery today. While I was bagging up my groceries (thanks Aldi) and trying to quietly keep from losing my ever loving sh*t, the lady next to me asked if I have one of those phones that takes pictures. Trying not to convey my annoyance to someone else adding to the million questions that make up my day, I replied that, yes I do have one of those fancy phones. She asked to take a picture of me with the kids. At the grocery. Together. She told me that she wishes she had photos of herself doing every day things with her kids. She validated the fact that a simple grocery trip is hard. She told me that what I do matters. She doesn’t miss what made the days hard, but she misses what made them sweet. I will always cherish this picture and the message that came with it.”

An unexpected photo taken of a local mom taken by a stranger at a grocery store has gone viral, surpassing 163,000 Facebook likes, nearly 6,000 comments and more than 26,000 shares.

Jess Wolfe, 31, was in the middle of a typical trip to Aldi on Michigan Road with her four children when she was approached by a woman who wanted to take a photograph of them.

Wolfe said her children were a little rowdy and giggly throughout the busy store and that they often like to touch things, “help” and possibly have a nuclear meltdown at some point. Wolfe said she was bagging groceries with her baby on her back while trying to keep all of her kids close when a woman asked if she had a phone that took photographs.

“I was a little taken aback and a little frazzled at the moment but tried to respond graciously that yes, I have one of those kinds of phones,” Wolfe said.

Wolfe said the woman told her that she wished she had photographs of herself doing everyday things with her own kids and that she knows how hard it is to go to the grocery with children in tow.

“Unlike most people, who just tell me how much I will miss these days, she said she definitely doesn’t miss what made the days hard, like rowdy kids in a grocery store, but she misses what makes them sweet,” she said. “She reminded me that it was special that we were able to be together, even if it was in a grocery store.”

Wolfe believes the photograph allowed moms everywhere to breathe a sigh of relief that they aren’t the only ones who face exhausting outings.

“I think that this photo and caption resonated with women everywhere who are in this phase of life because it doesn’t portray a put together mom with her kids sashaying through a fancy grocery store. It’s real life,” Wolfe said. “The other thing I believe resonated is the portrayal of the paradox of motherhood. It is hard and exhausting but incredibly sweet.”

“I love to capture that sweet bond that moms have with their babies,” Wolfe said. “Another everyday, mundane action that can totally seem monotonous, but is absolutely priceless.”

Wolfe said after receiving responses regarding the photograph with her children, she will be working on a new project involving everyday, lifestyle sessions capturing a friend’s family.

Wolfe and her husband, Nate, a musician who often performs at Cobblestone Grill, Traders Point Creamery and elsewhere in Zionsville, live in Brownsburg but are building a home in Whitestown.

Because of the popularity of the photograph, Wolfe has started a page where people can follow her journey through parenthood on Facebook @justjesswolfe