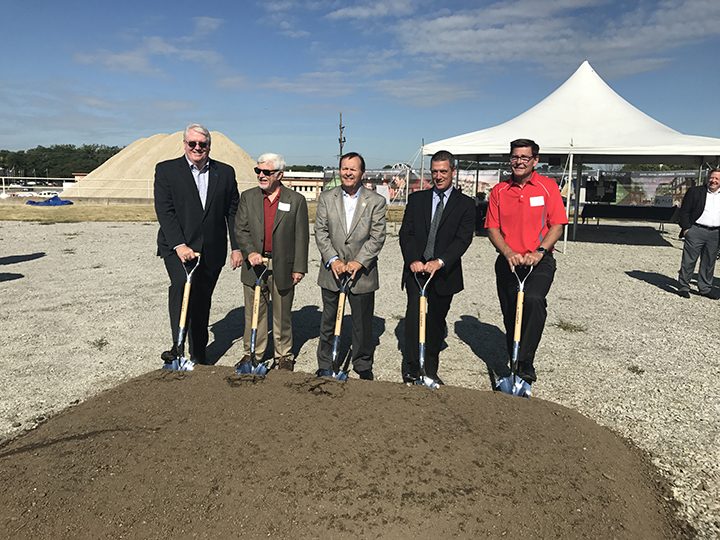 Anderson Birkla held a groundbreaking ceremony Aug. 23 for its new $60 million mixed-use development called The Proscenium. It will include office space, residential units and retail, all surrounding a center green along Range Line Road near Carmel Drive, where Arby’s and Party Time Rental previously stood.

The project includes more than 20,000 square feet of retail and office space. The public green will feature 1.8 acres for events.

Construction could last 18 to 24 months.

“As I stand here today, we struggled to come up with a name for this project,” Tony Birkla of Anderson Birkla said at the groundbreaking ceremony. “We named it Proscenium, and we struggled with that quite a bit because the name doesn’t roll off the tongue, but when you think about what a proscenium is, it’s the part of the stage in front of the curtain. You look at the backdrop of what we’re developing, and this property moves into the City Center and then into Midtown. It’s a fantastic entry into the city. It’s a once-in-a-lifetime development opportunity. I’ve been developing for more than 20 years, and I could not be more excited for this opportunity to be in one of the best cities in America.”

Birkla said the project has changed a lot since it was announced in 2015. Two new roundabouts have been incorporated into the design — the one recently built at Range Line Road and Carmel Drive and the one that will be built at Executive Drive. Birkla said developers were able to purchase the former Arby’s site, which was not originally part of the plan, and incorporate it into the project.

“It’s been a two year design process, and we try to keep up with what’s going on in Carmel, and it’s tough,” he said.