You are at:Home»Current in Carmel»Column: The heart of Madrid 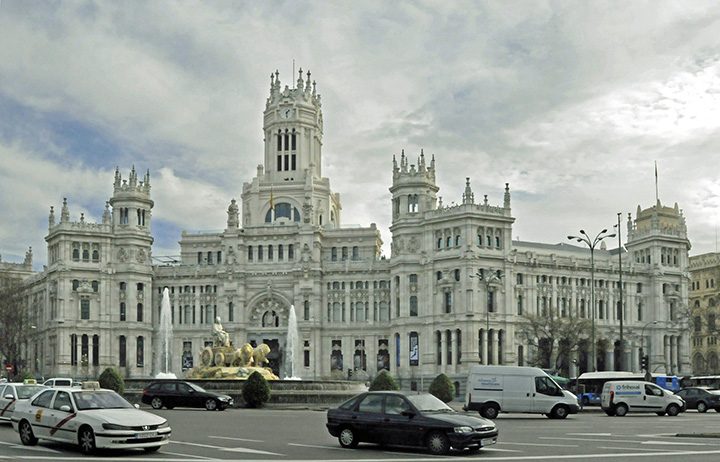 Palace of Cibeles and Cibeles Fountain in Madrid, Spain (Photo by Don Knebel)

Madrid is one of the most beautiful cities in Europe, with broad tree-lined boulevards and a number of vibrant plazas. One of those plazas can legitimately be called the physical and emotional heart of the city.

The Plaza de Cibeles, at the intersection of two important streets, derives its name from the Cibeles Fountain, a magnificent marble fountain depicting Cybele, the protector of the city, riding a chariot pulled by two lions. Cybele, sometimes called the Great Mother, is an ancient Anatolian goddess of fertility and nature. According to Greek mythology, Cybele turned Atalanta and Hippomenes into lions after she caught them having sex in one of her temples, demonstrating her power over nature. The Cibeles Fountain, designed by Spanish artist Ventura Rodriguez in 1777, was placed in front of the Prado Museum in 1782, where it provided water for Madrid residents and their horses. In 1895, the fountain was moved to the center of what was then known as the Plaza de Madrid. The plaza quickly assumed the name of the fountain, which had become the symbol of the city.

The Plaza of Cibeles is surrounded by four distinctive buildings, each of which anchors a different Madrid neighborhood. The design of the most beautiful of the four buildings, combining gothic and classical elements suggesting a medieval cathedral, belies its prosaic original purpose as the headquarters of the Madrid Postal Service. Called the Palace of Communications when it opened in 1919, the building became Madrid’s city hall in 2011 and is now known as the Palace of Cibeles.

After significant victories by Real Madrid, Madrid’s professional football (soccer) team, the team and its fans congregate in the Plaza de Cibeles and plant the team flag atop the figure of Cybele. Nothing more eloquently confirms that the plaza is the heart of Madrid.