You are at:Home»Current in Zionsville»Former Pacers center selling Zionsville home, moves to Arizona 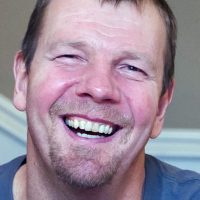 So Smits and his girlfriend, Donna Jarrett, experimented living in Arizona last winter in a rental home. They decided to make it permanent and recently purchased a house.

This summer, Smits’ 11,000-square-foot Zionsville home went on the market. He purchased the 12.5-acre property in 1998 and added an indoor basketball court in 2014. The asking price is nearly $2.7 million for the home, which includes an exercise room, five bedrooms and a movie theater. Larry Rasmussen, of Century 21 Rasmussen Co., is his real estate agent.

Smits’ house in Cave Creek, Ariz., is approximately one-third the size of his former home. One plus is there are plenty of opportunities and areas for Smits to ride his 65 motorcycles.

“There’s riding areas all over the place,” Smits said. “There are thousands of miles of trails to go exploring.”

Smits said in the summer months when it gets really hot in Arizona the couple will probably travel more.

“We’ll load up the camper and go to Idaho or Colorado, and we’ll come back to visit Indiana,” Smits said.

Smits said he is not concerned with missing his son, Derrik, a 2015 Zionsville Community High School graduate who will be starting his redshirt sophomore season at Valparaiso University.

“Every game is on the internet,” Smits said. “We visited him some and probably saw four or five games last season, so we’ll probably do the same. I’m hoping he can have a breakout year.”

Smits said the thing he will miss most about Zionsville is his friends.

“We’ve been back four or five times and we have a lot of fun coming back visiting,” Smits said. “We’ll continue to do that.”

Smits’ nephew, Cassius Smits-Francisco, who was living with Smits when he played for ZCHS, finished his high school basketball career in Arizona. He is now a University at Idaho freshman.