You are at:Home»Current in Zionsville»Celtics coach Stevens speaks to Zionsville club that influenced his youth 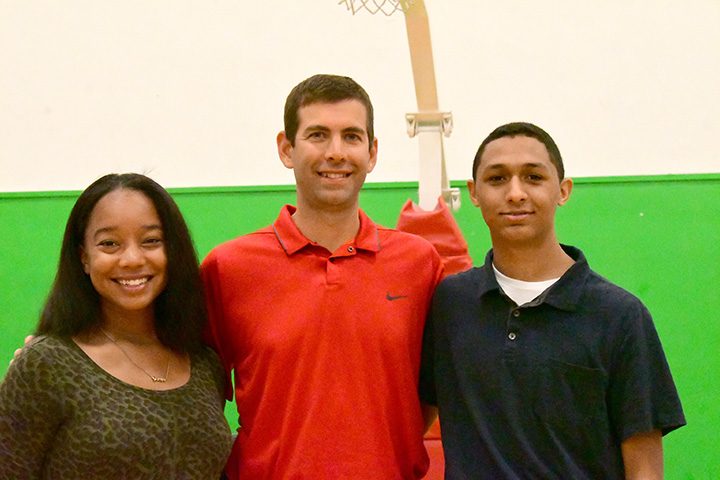 The Boys & Girls Club of Zionsville welcomed back a hometown hero to its Be Great Breakfast. Brad Stevens, head basketball coach of the Boston Celtics and a Zionsville Community High School graduate, was the guest speaker. 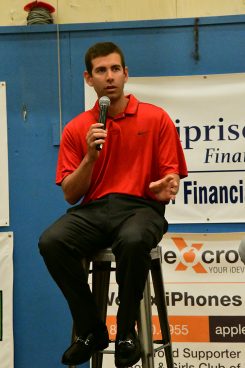 Stevens returned to his home court Aug. 12, where members and guests submitted questions for him to answer in a casual and open forum. The fundraiser was held in the main gym at the West Club where Stevens spent a lot of his youth refined the skills, fitness and character the club seeks to instill in youth.

The former Butler University basketball head coach opened the talk by praising what the club does for Zionsville youth and how it taught him many fundamental life lessons that have stuck with him throughout his life.

“The value of sports you can’t quantify,” Stevens said. “But it’s fun to think about how sports can add to your life.”

Stevens told a story about when his father was coaching him in baseball and the game was down to the wire. With Stevens on the mound, his father came out to talk to him. Instead of telling him what pitch to throw or where to make the next play, his father asked, “Did you remember to feed the dog?” He recalled looking at his father with a confused look on his face and said, “I don’t remember.” He then threw the next pitch and got the out.

“It’s those unusual tactics that sports are all about,” he said.

Stevens was asked who his favorite football player was. He said he is smart enough to know what town he was in and what town he works in, so he mentioned Peyton Manning and Tom Brady.

Stevens also was asked how hard it was to transition from college basketball to the NBA. He said the Celtic organization is very similar to Butler with dedicated owners and staff.

Youth of the Year

The Boys & Girls Club of Zionsville Youth of the Year winners also were announced. They met with Stevens and spoke to the crowd.

Janiah Holloway and Wesley Hopkins spoke about how Boys & Girls Club helped them transition through tough times and taught them valuable life lessons.

Hopkins, a U.S. Marine Corp. recruit, said the club “helped him learn and know the meaning of myself.”  He will start with the Marines in the fall.

Holloway competed in the Youth of the Year Boys and Girls Club state finals and placed fourth.

“It is an accomplishment to meet Mr. Stevens, knowing that he went through the Boys & Girls club, too,” she said. “I’m really happy, and the club has had such a positive impact on my life. Everyone here is like family.”