You are at:Home»Current in Fishers»NFL Alumni partner with the Pint Cycle for a charity tour 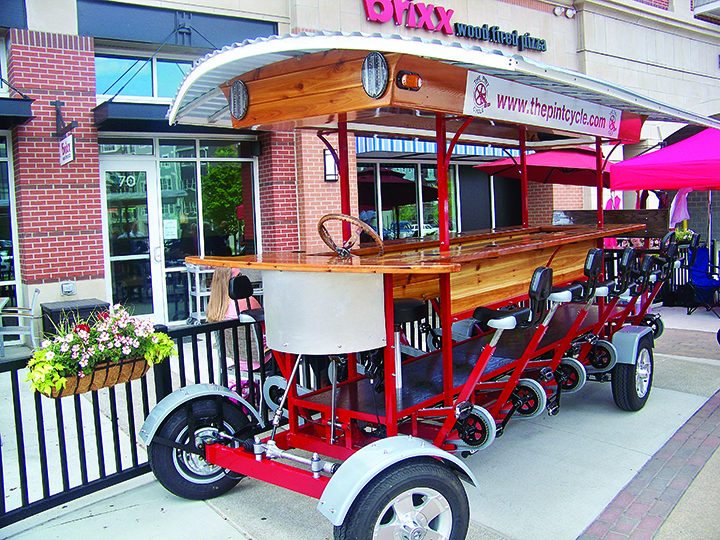 The Pint Cycle, a local business known for touring bars and restaurants around Fishers on a 16-person bicycle, will offer a new kind of riding experience from 6-8 p.m. Sept. 15. President and Owner Chris Hutchinson has partnered up with the NFL Alumni Indianapolis Chapter to create a charity ride to benefit Caring for Kids, a scholarship fund designed to help students in need.

With nearly 100 percent of the proceeds being donated to charity, the tour will be a chance for adults 21 and over to give back while pedaling along with their bartender for the night, former Indianapolis Colts player Bill Schultz. According to Hutchinson, the new tour won’t be like any other tour from the Pint Cycle. Beer and wine will be provided on the bike, but there also will be free sampling opportunities from the first stop at Four Day Ray Brewery.

“So, they (Four Day Ray) will do kind of like a hosted sampling and education demonstration, so they’ll get a chance to not only taste the beer, but also hear the story behind it,” Hutchinson said. “Then one of the owners of the Four Day Ray Brewery is going to give them a private brewery tour where they’ll walk them through the inner workings of the brewery and show them the production facility and how they make the beer.”

According to Hutchinson, he said he hopes this charity ride causes people to become more aware of the NFL Alumni organization and their mission.

“As you can imagine, there are a ton of former NFL players across the U.S.,” Hutchinson said. “The amount of time and energy that they put in to try and help particularly kids that come from troubled backgrounds is pretty impressive. So, if I can help give back in any way, that’s a big part of the mission of the Pint Cycle.”

Tickets to the two-hour long charity tour will be $100 per person. To reserve a spot, visit thepintcycle.com/availability-online-booking/.