You are at:Home»Current in Noblesville»How we got here: Mayor Ditslear sits down with Current to discuss Nickel Plate corridor past and potential future 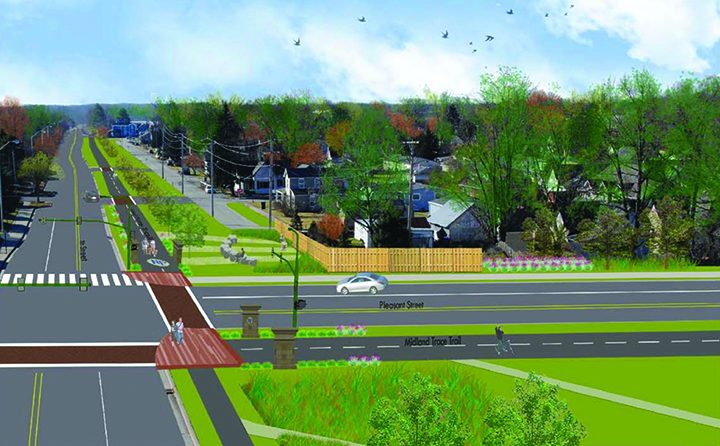 This rendering shows the connection of the Midland Trace Trail and the proposed Nickel Plate Trail at Eighth and Pleasant streets in downtown Noblesville. (File image)

Tension surrounding the future of the historic Nickel Plate Rail Lane has divided many in the city since the Feb. 28 announcement of the Hoosier Heritage Port Authority’s plans to transform 9.2 miles of the tracks into a $9.3 million pedestrian walking and biking path, which has since been compared to the Monon.

Last week, Noblesville Mayor John Ditslear sat down with “Current in Noblesville” to discuss some of the recent history on how the Hoosier Heritage Port Authority (made up of representatives from the City of Noblesville, City of Fishers and Hamilton County) reached its decision to launch the trail project.

Although there’s no timetable on when/if the project will be approved, funded or  constructed, the City of Fishers’ and City of Noblesville’s boards of public works began the federal process by approving rail banking for the entire Nickel Plate corridor, which runs from Tipton to downtown Indianapolis, July 31. Rail banking, according to the National Trails System Act of 1983, allows owners of a rail line to convert the line into a trail and preserve the corridor for future rail use. 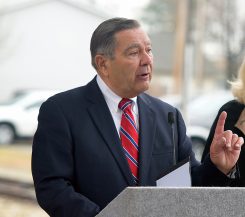 Noblesville Mayor John Ditslear speaks at the joint announcement for proposed plans to convert 9.2 miles of rail line into a trail. (Photo Illustration)

“(By the mid-1990s), the railroad had been abandoned. Noblesville and Fishers bought that right of way with federal money, and then a year or so later, Hamilton County joined that to form the Hoosier Heritage Port Authority,” Ditslear said. “Always, the purpose was to keep that line, (procuring) it for mass transit at some point in time. That was the hope and the goal all along. Over the past 10 years, and maybe even longer than that, we worked very hard to get mass transit approved. We finally got (our plan) to the (state) legislature, but then the legislature exempted (light) rail as a future use. Very deflating, especially since we had been protecting that rail for that long period of time.”

Ditslear said the proposed trail is the result of frustration with the legislative decision to exempt light rail from the corridor and the cost of the proposed Green Line through Fishers and Noblesville, connecting both to downtown Indy.

“The Green Line was going to be a first priority (for IndyConnect) because of the population of us and Fishers,” Ditslear said. “When they got to looking at costs, they were looking at nearly $350 million, and then about $10-$11 million to operate it. So, out of frustration, what do you do, knowing that fixing (the existing rail) and getting the State Fair Train back will cost $5-10 million, give or take? In addition to that, we would have to fix the tracks on Eighth Street at a cost of about $2.5 million.” 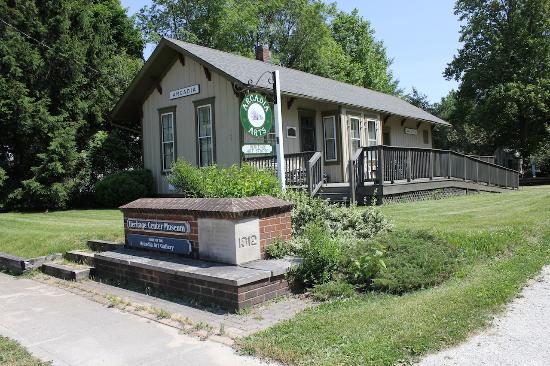 The city has insisted that a train and rail line, traveling north from downtown, will be an important part of Noblesville culture.

On July 31, the Noblesville Board of Public Works approved the proposal of Nickel Plate Heritage Railroad, a partnership of Arcadia Arts & Heritage Depot and Atlanta Pacific Railroad, to operate the rail line from Noblesville to Atlanta and potentially to Tipton.

Ditslear said terms are still being negotiated between NPHR and the HHPA, but the proposal included ideas for themed excursion trains.

According to Ditslear, most of the potential operators’ proposals included running freight through downtown Noblesville.

“I think even the pro-train people wouldn’t want freight running through downtown,” he said. “Four of the five proposals included freight, so the decision to go with Nickel Plate Heritage (Railroad) frankly was pretty easy. It was true tourism.”

“I have a presentation from ITM dated 2007. The goals and objectives (in the presentation) really sound great, and had they accomplished half of what they wanted to do, we probably wouldn’t be here,” Ditslear said. 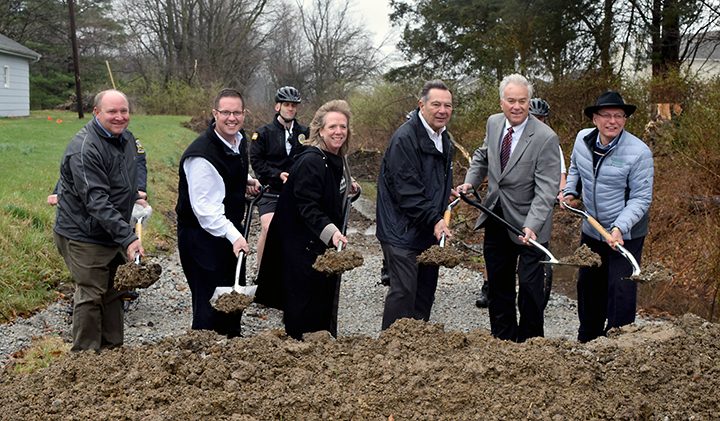 The current proposal of the Nickel Plate Trail connects to the Midland Trace Trail, which is under construction, in Noblesville at Eighth and Pleasant streets.

“We’ve been working on the Midland, and it’s a little frustrating it has taken as long as it has, but we had to buy part of 90 parcels of property between (downtown Noblesville) and Westfield to get that started. We will, at least as long as I’m around, continue work on the Midland and not do anything with the Nickel Plate (Trail)…allocating money, asking for money, etc,” Ditslear said. 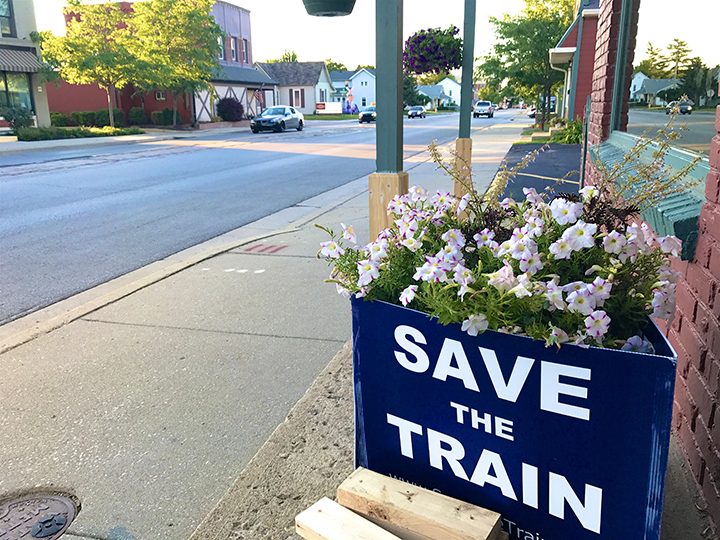 A “Save the Train” sign sits on the front step of the Noblesville Township Community Center during a Save the Nickel Plate community session June 19. The community center sits on Eighth Street in downtown Noblesville where the rail line passes directly through on the street. (File photo)

Decisions about the line have created divisiveness within the city. Community- and resident-based initiatives have produced large “Save the Train” campaigns by those who want to see the continuation of a train system from Noblesville to downtown Indianapolis.

One idea, “Rails AND Trails,” gained backing, particularly from community group Save the Nickel Plate, but the city has said the process to have a trail along the rail line is not feasible in some areas because of the high cost of adhering to the Federal Highway Administration’s setback recommendation of at least 25 feet or more; property acquisition; tree line removal; building of additional bridges; and right-of-way, all in addition to the cost of creating the trail.

“One of the disappointing aspects of this project has been the way individuals have been treating others with differing viewpoints,” Ditslear said. “We have a wonderful city, but this topic has become divisive and a detriment to the community because it is running down Noblesville. Whether you are for trains or for trails, we still have a great city and we should not lose focus on that.”

TIMELINE: A BRIEF HISTORY OF THE NICKEL PLATE RAIL LINE