You are at:Home»Current in Fishers»The Beer Can Man: Fishers resident has expansive collection worth $30,000 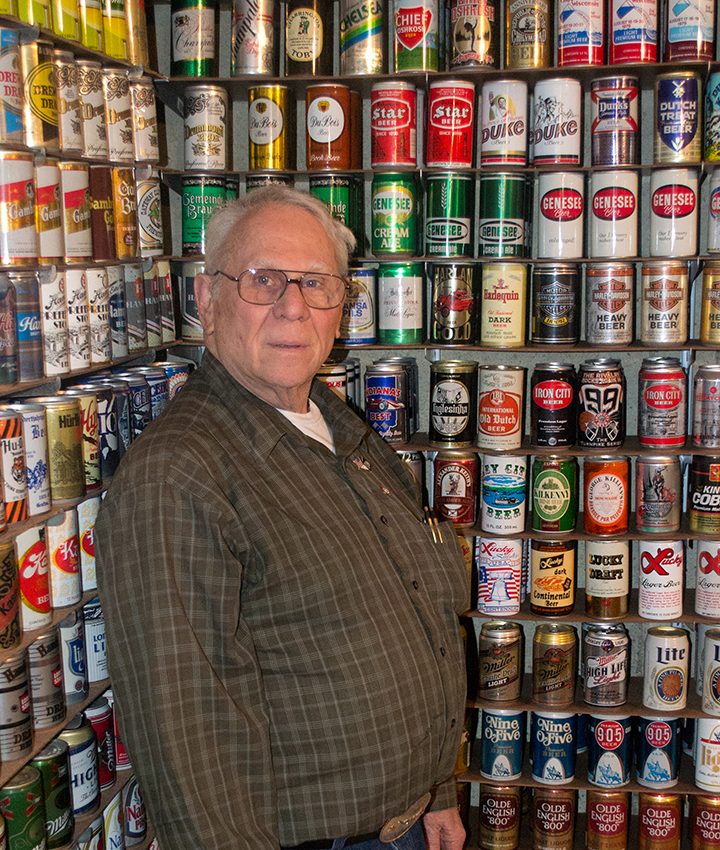 Richard Bacon stumbled onto his hobby of collecting beer cans and now has thousands lining homemade shelves in his Fishers home. Bacon said the collection began when he and his wife moved to Fishers from Indianapolis and found his sons’ beer can collections from the 1970s.

“When they got interested in other stuff, we boxed all their beer cans up and put them in the attic or garage, and when I was up there cleaning up and getting ready to throw stuff away, I ran into their cans boxed up and brought them here (to Fishers),” Bacon said. “I thought I would build some shelves just to see what it looked like. I ended up with about 600 non-duplicate cans to start with, so then I started buying to add to the collection.”

Now, Bacon has approximately 4,000 non-duplicate cans, and 10,000 to 12,000 total. He estimates his collection is worth nearly $30,000. He said he’ll see advertisements in newspapers or was acquaintances with others who also collected beer cans and gave away their duplicate. 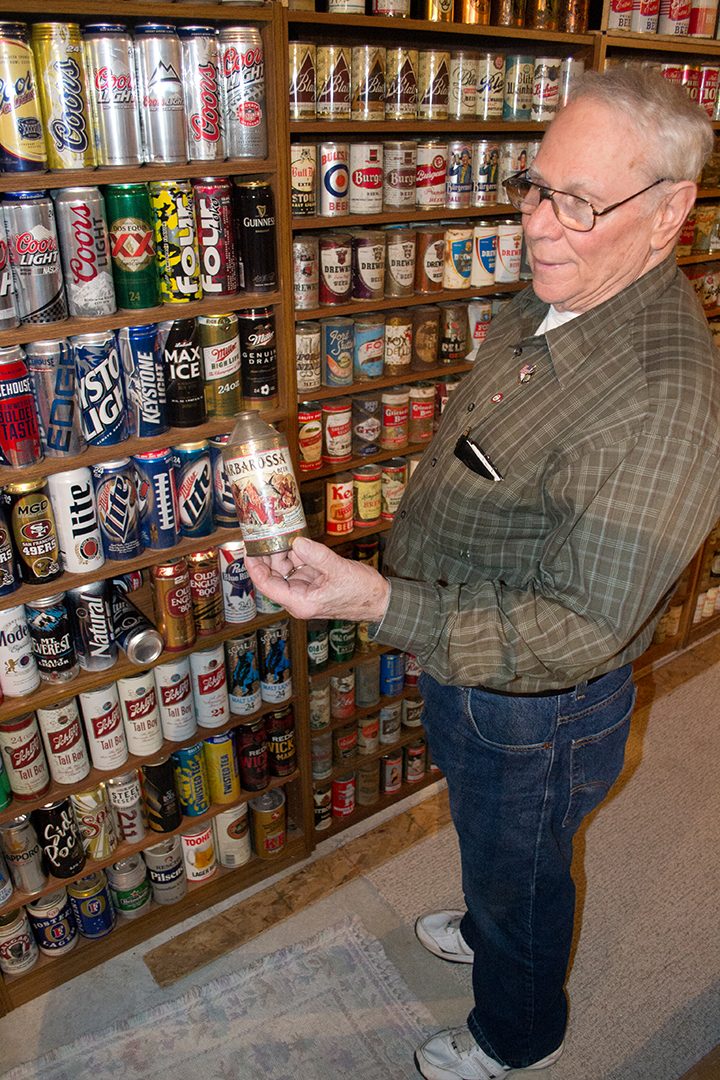 Richard Bacon displays his most expensive can, a Barbarossa cone top valued at $1,000. (Photos by Zach Ross)

All the cans are opened, but Bacon said he’s only drank one or two from the collection. The rest he gathered or purchased already opened.

“The appearance of them is what makes them valuable,” he said. “I wouldn’t want to have cans that are unopened because they explode and leak and make a real mess. I wouldn’t want any part of having a collection of unopened cans.”

Some cans in Bacon’s collection are from the 1940s and required a churchkey to open. He has cone tops, flat tops, special Sterling cans with the Kentucky Derby winning horse and rider from 1962 to 1976. He also has soda cans, such as the original Big 10 cola cans and the 1976 7UP “United We Stand” commemorative state set. He’s missing three states from that set – Arkansas, Hawaii and Nebraska. When stacked in order, numbers coincide with states in alphabetical order, the collection creates an image of the United States.

Bacon said a few cans in his collection come from overseas.

“It’s interesting to see where they come from,” he said. “When I was sorting them out and moving them around, I found some from New Guinea, Scotland, Ireland, England, Canada and Mexico.”

Bacon is a member of the Brewery Collectibles Club of America, which has approximately 35,000 members. Gregory Gerke, vice president of the local BCCA chapter, the Indy Brewery Collectibles, heard of Bacon’s collection and brought him a few hundred cans.

“I put together a bunch of newer stuff I thought he wouldn’t have or that he was unlikely to have, and I brought them over to him,” Gerke said. “Beer cans are fun. The collection itself is cool. I put them on walls and shelves and people come over and are amazed at how many different kinds of beer there are from foreign countries or beer just for women. It’s really cool.

“You have people who will bend over backwards for you, just like any other organization,” Bacon said. “It’s a big thing. People don’t realize how big it is.”

The local BCCA chapter will host an event open to the public. Non-collectors can can attend. 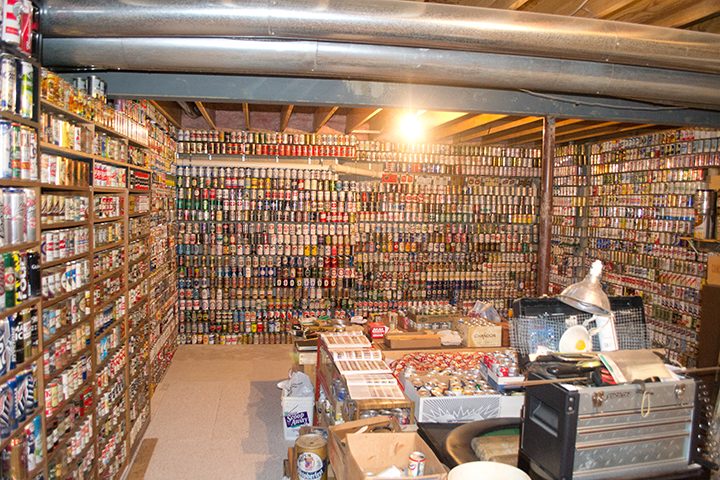 Means of storage: Richard Bacon has between 10,000 and 12,000 collectible beer cans and hand-built six sets of 19 shelves for his basement to hold the cans. Each shelf is 8 feet tall and 8 inches wide.

Favorite can: Bacon said he has several favorites because of color and value, but some include the Disco cans from the 1970s. “They’re just pretty and stand out,” Bacon said. “There’s six that are really ornate and they were made special for one guy, (Rick Haentjens), so they’re just like a specialty can.”

Most expensive can: Bacon said he believes his most expensive beer can is a Barbarossa cone top can from 1940. He believes it to be valued at approximately $1,000.

Collection’s worth: Bacon is unsure the exact price of his collection, but he estimates it to be about $30,000.