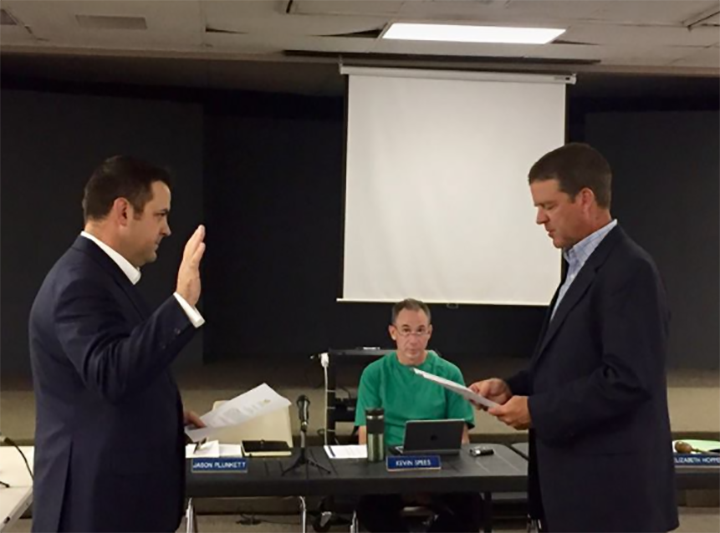 The Zionsville Town Council met July 17 to swear in a new member, fund a police K-9 replacement and expand the scope of a road project.

What it means: Plunkett replaced Jeff Papa, who stepped down from the council after accepting a job with Barnes & Thornburg, which provides legal services to the town.

What’s next: Plunkett will serve the remainder of Papa’s term.

What happened: The council approved using $17,500 from the Zionsville Police Dept.’s operating fund to replace Eso, a ZPD K-9 who recently retired because of health problems.

What it means: Previously, the K-9 program had been completely funded through donations. With Eso’s health problems and the other ZPD K-9, Jelka, recovering from being hit by a pickup truck, ZPC Chief Robert Knox requested that the town help fund a replacement.

What happened: The council approved using $220,000 from the Cumulative Capital Development Fund to expand the scope of the North-South connector project.

What it means: For years the town has been looking to add a north-south road on the west side of town to help alleviate traffic from population growth in the area. The additional funds approved expand the project to include engineering work for roundabouts at each end, at Oak and Cooper streets (where the new road will begin) and at its northernmost point where it will connect to CR 875 E.

What’s next: Engineering work will continue this year, with land acquisition planned for next year and construction beginning in 2019.

What happened: The council got its first look at an ordinance that would change part of Sixth Street from a one-way to a two-way street.

What it means: Sixth Street is currently designated a one-way street from Poplar Street to Ash Street. The proposal changes the one-way designation to Locust Street to Ash Street, which allows drivers traveling west on Locust Street to head south and make a near-immediate turn to continue heading west on Poplar Street. ZPD received many complaints of people driving the wrong way on 6th Street for this 60-foot stretch.

What’s next: The council is expected to vote on the ordinance at a future meeting. The next regularly scheduled meeting is 7 p.m. Aug. 7.