On Aug. 18, I will be stepping onto the stage at the Phoenix Theatre…and out of my comfort zone. The Phoenix is one of several venues for this year’s IndyFringe Festival, part of an Indianapolis tradition that originated in 2005. Entertainers from all parts of the U.S. will offer hour-long acts in venues along the Mass Avenue corridor over an 11-day period, with more than 72 artists, giving in total more than 400 performances.  There is something for everyone: cabaret, comedy, dance, drama, magic and music. 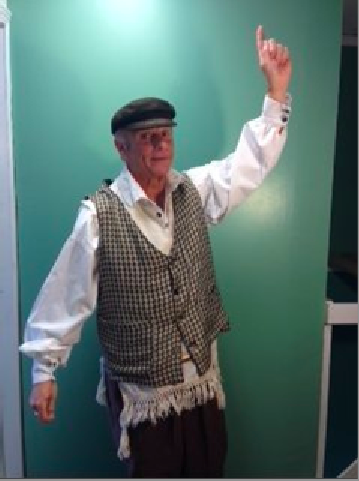 My performance is called “The Art of the Jewish Joke.” I have read or heard thousands of them, and while I have no idea where my keys or glasses are, I remember (and can repeat) just about all of them. When I buy books of Jewish humor, I read the first line of an anecdote, then I anticipate the last line, skipping to the end to confirm my prediction.  I usually nail it, but I always go back and read the whole thing again, anyway. Why? Because just like “The Star-Spangled Banner,” there’s lots of ways to “sing” it, and occasionally the new version is an improvement. Or, as many of my Jewish friends say when I tell one, “I’ve heard it already, and you’re telling it wrong.”

Humor is one way for Jews to stay connected to their faith and traditions. Food works, too. Many Jews do not read Hebrew or speak Yiddish, although everyone knows at least some Yiddish words. If you don’t, you’re a meshuggana (Look that up. It’s a great one.)

In my show, I’ll have the audience spin a wheel that contains categories of popular Jewish topics: food, money, temple politics, kvetching (look that up, too), assimilation, and marriage. Here’s a good one about Jewish mothers:

A Jewish girl brings three boys home to meet her mother and just for fun asks her mother to pick the one she thinks her daughter has chosen to marry.  The mother questions them all.

“This one,” she says, pointing to the young man in the middle.

“How did you know?” asks the daughter.

You can’t stick a hole in a jelly doughnut and make it a bagel. Likewise, a real Jewish joke is about more than inserting a rabbi or a guy named Goldstein into a one-liner.  Despite being “the chosen people,” Jews suffered for thousands of years. Maybe they got the worst of the deal—but they got the best of the argument by incorporating their predicaments into their humor. Why should I let you make fun of me, when I can do it better myself?

Many Jewish jokes do not end with a typical punch line, but with an observation or a commentary on life. And some are a little bit naughty:

A Jewish widow knocks on the door of an elderly Jewish man next door. “Would you like super sex?” she asks.

“I’ll take the soup.”  (If you’re not laughing, you should say that one out loud.)

Muslim, Christian, Jew, and atheist alike can enjoy a good Jewish joke.  And I’ve got a million of ’em.  Okay, maybe two thousand.