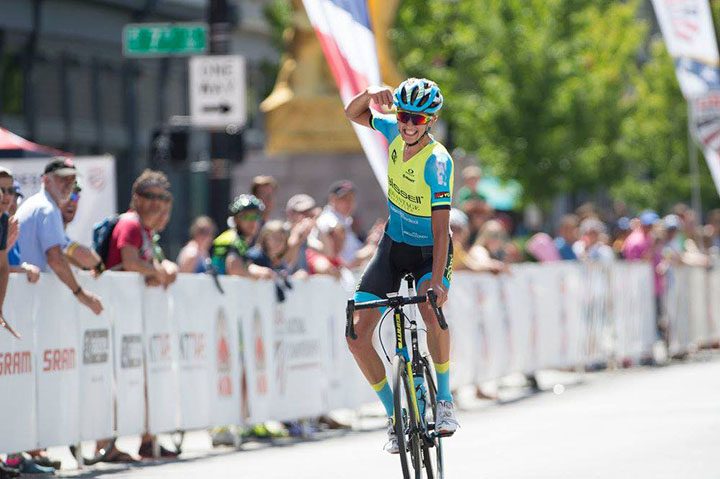 Thomas Revard grew up around cycling. After all, his grandparents Tom and Nancy Revard opened The Bike Line in Broad Ripple in 1979. Revard’s father, Bill, and his uncles, Jimmy and Charlie, own the Broad Ripple shop and the Carmel store, which opened in 1997.

So Revard, 19, started riding bicycles at age 4 and racing at age 8.

“People my age usually discover cycling in college, so it’s rare or unique to have someone that has been racing as long as I have,” Revard said.

His experience is paying off.

Revard captured the Category 1 Criterium U23 (ages 19-22) at the USA Cycling Amateur Road Nationals July 2 in Louisville. It was the 2016 Carmel High School graduate’s first national title. There was no prize money for the event, but Revard said, “You got to go home with a pretty cool jersey.”

Revard, a Marian University cycling team member, was riding for his trade team, Bissell ABG Giant Cycling Team. He followed up his victory by finishing third in the Indy Criterium July 8.

“He’s just as great as the cycling coach, so I was like, I have to run for him,” Revard said.

Revard was a member of Carmel’s cross country state championship teams in 2012, 2013 and 2015. However, he was injured and could not compete in the 2015 state finals. His best state meet finish individually was 26th in 2014 when the Greyhounds finished second in the team portion.

“I think the running helps my cycling because it gives me kind of a mental break,” Revard said. “It allows me to focus on something else. Cycling is hard in itself, but running is extremely hard. Running helps build that cardiovascular strength, so it allows me to ride faster.”